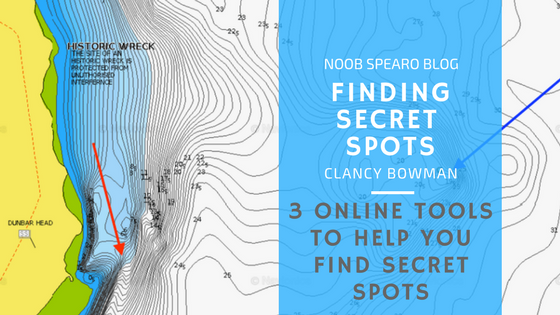 A Guide to finding your own Secret Spearfishing Spots

Introduction – How I learned to find my own spearfishing spots

When I was first starting out spearfishing I hassled anyone I could about where the best spots were. The people I was asking didn’t know anything about spearfishing (let alone secret spearfishing spots), but that didn’t stop them from giving me advice. On one occasion, someone had confidently pointed out a spot on a map that was both in a marine reserve and accessible only by boat. When I arrived I pretty quickly realised I’d been given a bum steer, but with the car full of gear and a hankering for fish for dinner I pulled out my phone and started trawling through google maps to find an alternative. Down a side street and a few kilometers walk later I jumped in at what has become one of my most treasured dive spots. On the first dive there I was blown away by the underwater terrain and the sea life it attracted. It was the first time I’d seen abalone and rock lobster, and although I didn’t have a licence at the time I was super excited.

After getting home and enjoying some barbecued mullet and sharing some tall tales of abalone and lobsters, I realised the internet held some clues about where our, at times elusive, quarry can be found. Since then, I’ve spent many hours trying to figure out where good diving spots might be hidden by taking advantage of these powerful online tools.

This article will include some tips on how to use the three main online tools I use to find secret spearfishing spots. At the moment I’m trying to figure out how to find Yellowtail Kingfish in the Sydney region. I’ll use this as an example of how to use these online tools. This isn’t a definitive guide and if you’ve got any further tips please leave them in the comments below!

Plenty of amazing spearfishing spots are out there, ready to be found

The first tool you will want to pull up is the fisheries app relevant to your state. From this app you’ll get two pieces of information that’ll help you find your next spearfishing spot. First, go to the species page and find what species you are trying to target. It’s important to be focused in your approach here because different fish live in different habitat. Look at the information about the species in the app and try to figure out the kind of area they are likely to live. It’s a good idea at this stage to pool information from a range of sources (forums, blogs, other spearos etc.)  so you have a good idea about where your target species can be found.

In my case looking for Yellowtail Kingfish the app tells me they’re associated with structure. I also know Kingfish are often found in current prone areas. This information can be used to narrow the search down. 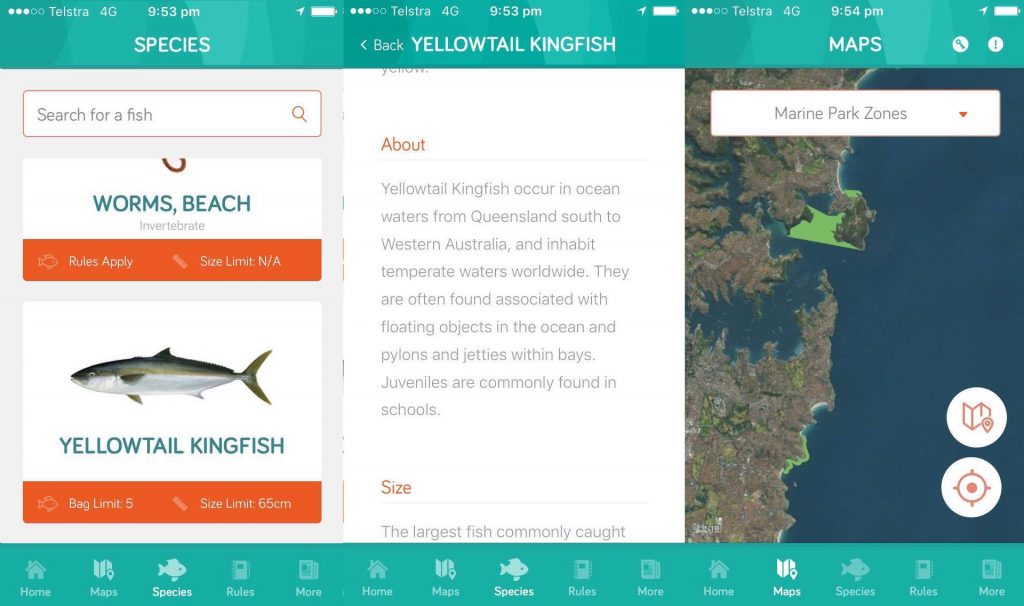 The next thing you need to check is for areas where spearfishing is prohibited. Go to the map page of the app and take note of where these are. It’s a good idea to continually double check the boundaries as you go through this process to be sure you’re not wasting your time honing in on a spot you’ll never be able to spear at.

Navionics is a free online web app which also has a paid mobile version. Navionics has a range of tools, but the main one we’ll use is the sonar chart. 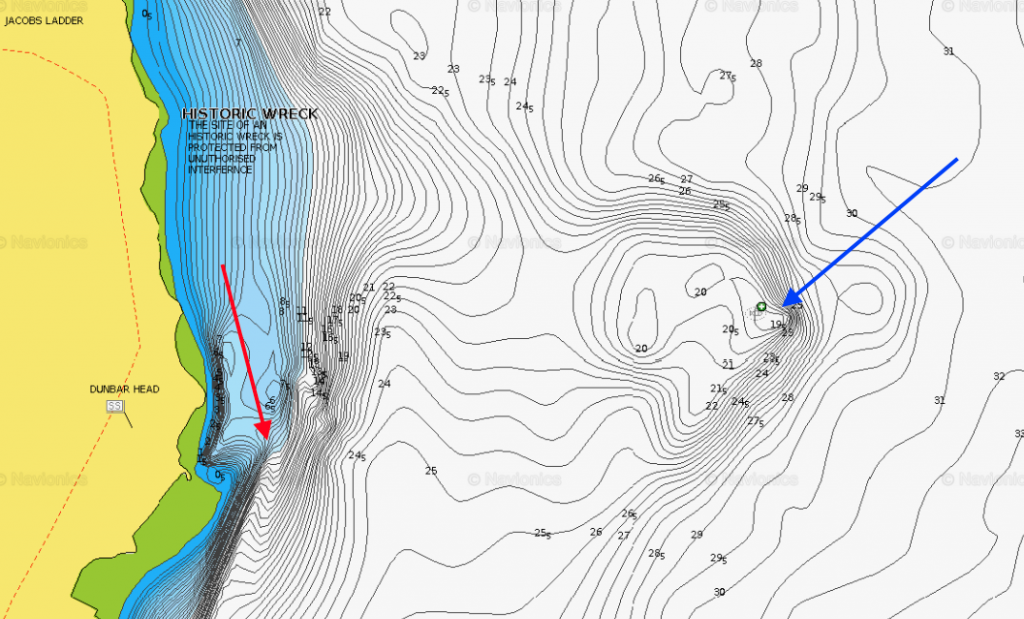 For the kingfish example, the right hand arrow looks like a spot that would hold fish, but it’s unrealistic for me to dive there. The left hand arrow on image 1 is looking a lot more promising because of the depth and proximity to shore. But there are a few more things to consider before jumping in the water

Once you’ve found some likely areas to check out, It’s time to open Google Maps and figure out how to get to them. Aside from the obvious and super hand turn-by-turn navigation Google Maps offers, it also has a few extra features that’ll help you get to new spearfishing spots. In the first instance I like to look at the ‘Map’ (default) view. This makes roads, tracks and land zone boundaries more visible. In this view you can see if there is vehicle, walking or boat only access to the spots you’ve scoped out earlier. It’s very important to remember that a line on a map doesn’t always mean that there is a road there, or that you’re allowed to use that road. Make sure you’re not trespassing or breaking other rules!

The next thing to look at is the ‘Earth’ view of google maps, this will show you an aerial photo of the area. I like to have a look to see if there is a convenient entry spot in the water, as cliffs and exposed rock ledges make things tricky. Next, look at the area between the water and the trees/houses. This is usually exposed due to tides and erosion. Often this area will look pretty similar to what the underwater terrain nearby. Again, what you’re looking for depends on what you’re targeting. Because I’m looking for Yellowtail Kingfish I’m looking for rough terrain, drop offs and pinnacles. If you were looking for Lobsters, medium sized boulders would be great terrain. Southern reef fish are often found on the boundary between rocks and sand, so if that’s what you’re targeting, look for that. 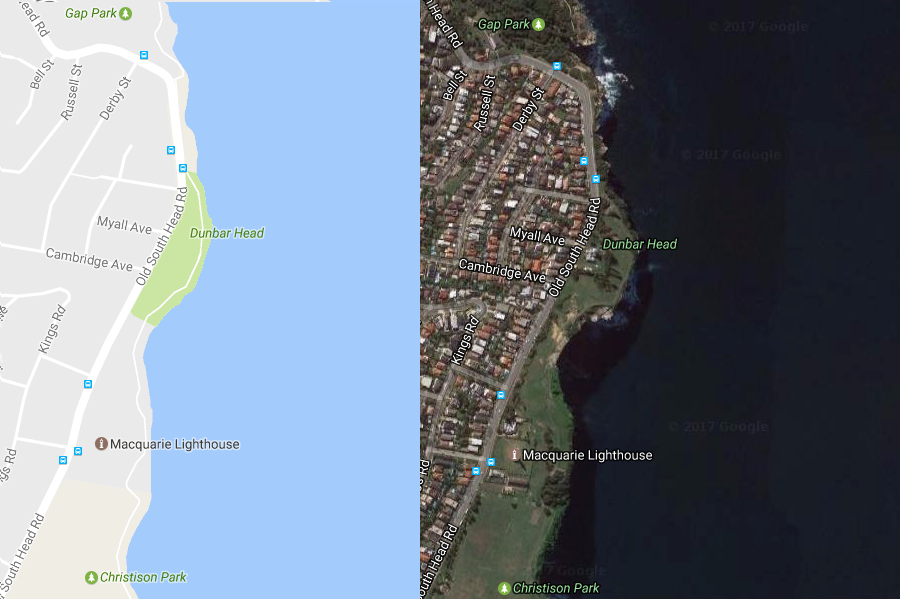 Looking on the ‘Map’ view might lead you to believe there is access to this spot, but when you flick over to the ‘Earth’ view it’s pretty obvious that short of abseiling there is no access. This happens all the time, I’ll file this spot away for a day I’m on a boat and keep on looking for something I can shore dive.

Finally, you can occasionally see what the underwater terrain look like in Google Maps ‘Earth’. This can verify what you’ve picked out in Navionics, as well as hone in your idea about where those weed edges are.

Don’t forget to pack your sense of humour! In pursuit of secret spearfishing spots I’ve gone down plenty of dead ends, gotten bogged, gotten lost, and put in a heap of effort to get to some mediocre spearfishing spots. But I’ve also found a few gems, and had a heap of fun searching out new places! Don’t think that places that are harder to get to are necessarily any better than ones closer to home. When diving new spots make sure you’re aware of the rules for that region. Finally, consider safety; new spots can hold unknown dangers so be prepared to not get in the water if either the conditions or the spot are unsafe. 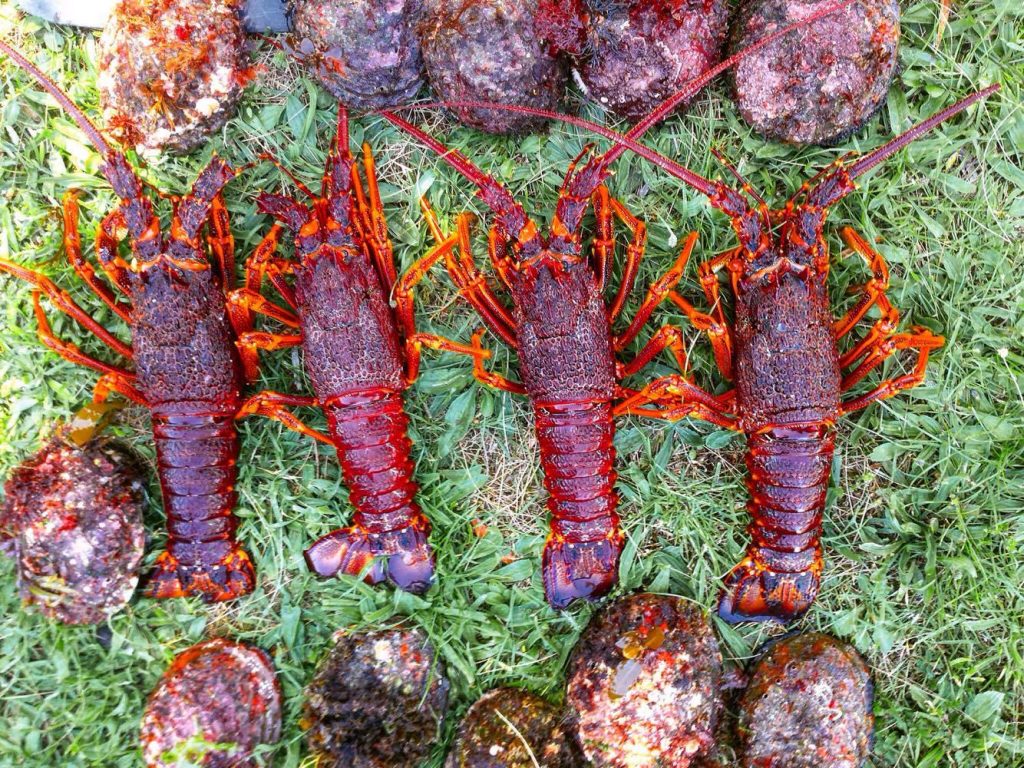 Put in the hours searching and reap the rewards!

If you have any feedback or comments about this article, show some love in the comments below!