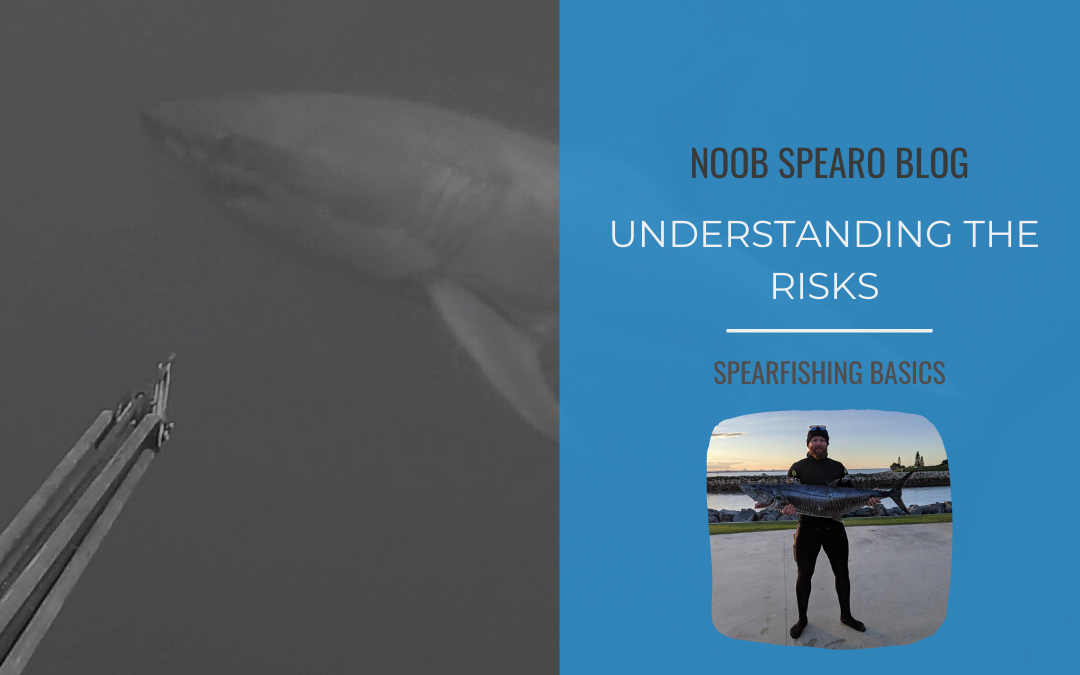 When you tell someone that you freedive spearfish, people will often ask two questions.

“What about sharks?” and “How long can you hold your breath?”.

Both of these questions identify risks that we need to understand and manage.

SOMETIMES though sharks and blackout are not the only risks we face and they are often not the risks we need to prioritize the highest.

Below I have compiled a list of common risks involved in the pursuit of spearfishing. Following each identified risk, there are instructional videos and pointers to minimize threats to your safety. Carefully consider each risk and identify the highest potential dangers to you and your mates in the environment where you spear fish.

Freedive spearos often share the ocean with other users such as Jetskis, Powerboats, Sail Boats and more. If you are diving near a shipping channel or near a river mouth, boat traffic could potentially be the most dangerous aspect to diving safely. Sometimes boats just either don’t see us OR they don’t even know what a dive flag is:(

Dale from Noob Spearo Community on Facebook “I don’t have any photos but had a boat come within 10 metres of my mate on sunday doing 20 or so knots, he was only about 20 metres from my boat with flags up and me yelling and screaming and waving at the dickhead. I’m guessing he was marking my spot.” 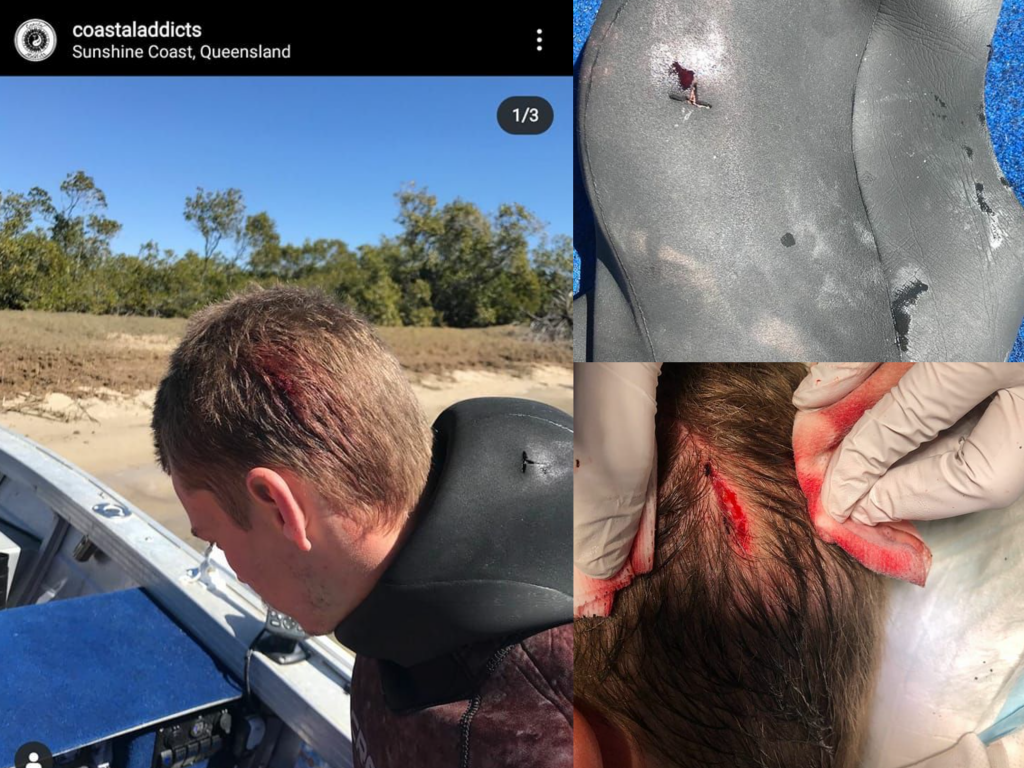 Mackenzie Logan “A Jetski ran over our mate Harry and didn’t even see him until he hit him. Split his head. Had a float and flag.”

Managing the Risk of Boat or Jetski Strike

When you hold your breath underwater there is risk involved. The most common danger spearos encounter holding their breath is Shallow Water Blackout (SWB). A SWB or Hypoxic Blackout often occurs within 3-6 M (10-20ft) of the surface. A diver will most often blackout (faint) on their return to the surface. A common cause of SWB is hyperventilation (or over-breathing). Freedive spearos will hyperventilate in order to flush carbon dioxide from their body and remove/reduce their urge to breathe (makes them ‘feel’ more comfortable). 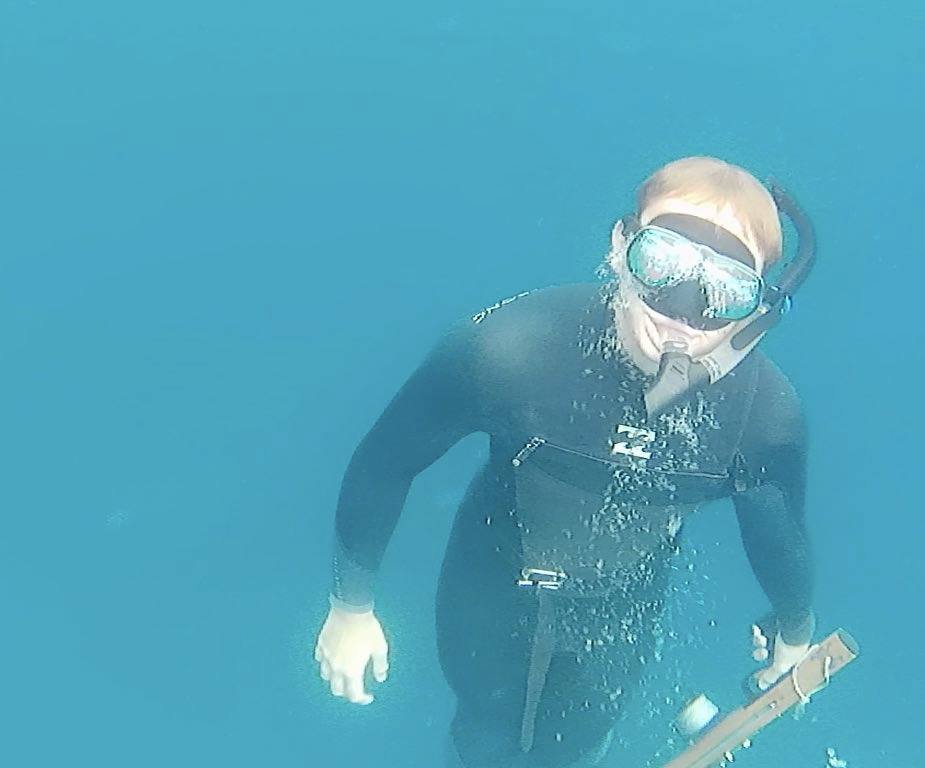 Remove the snorkel from your mouth! if you blackout, your snorkel will allow water direct access to your lungs. Image: Bret Whitman

A SWB will cause your mate to lose consciousness (faint) and if you’re not there to grab him and return him to the surface, he drowns.

“Hey Isaac, you forgot to mention greatest killer of spearos now a days… The combination of depth watches and Facebook! Our sport used to be about shooting fish, now it’s about how deep you dive and bragging online about it.” – Francisco Loffredi 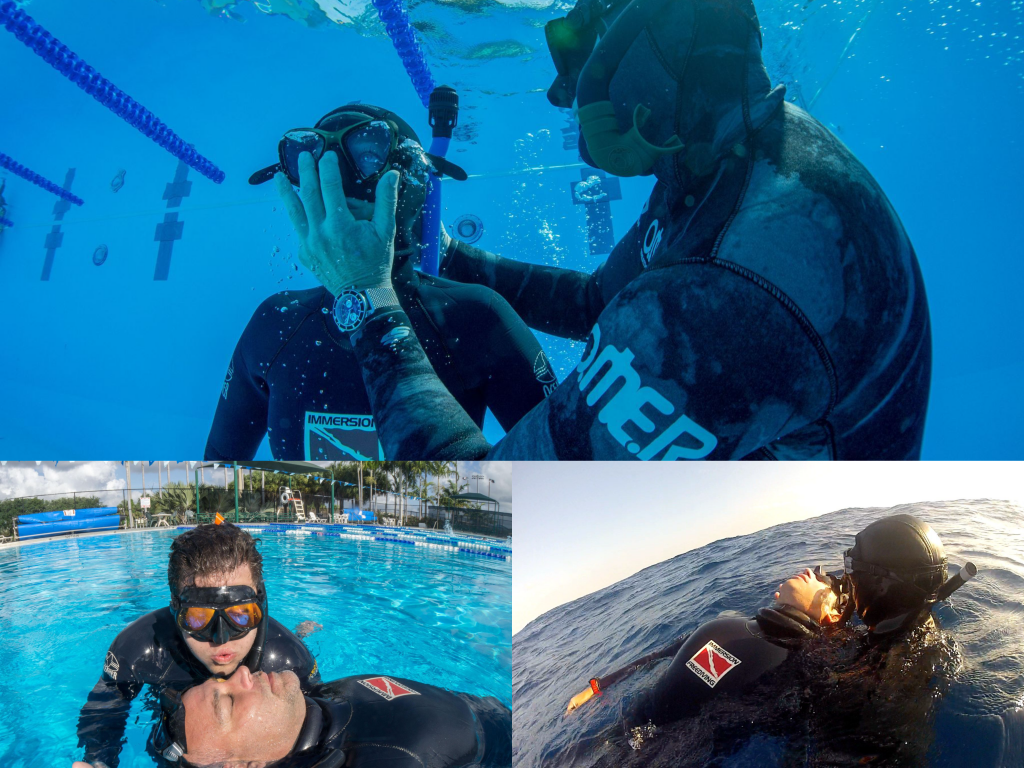 When we enter the ocean we become part of the ecosystem and as such the risk of a shark attacking you needs to be considered. Sharks can be erratic and unpredictable so assessing the risk they present at different times should be an ongoing consideration. They are fast, big and have a mouth full of teeth. Thankfully though, most of the time, they aren’t interested in us. 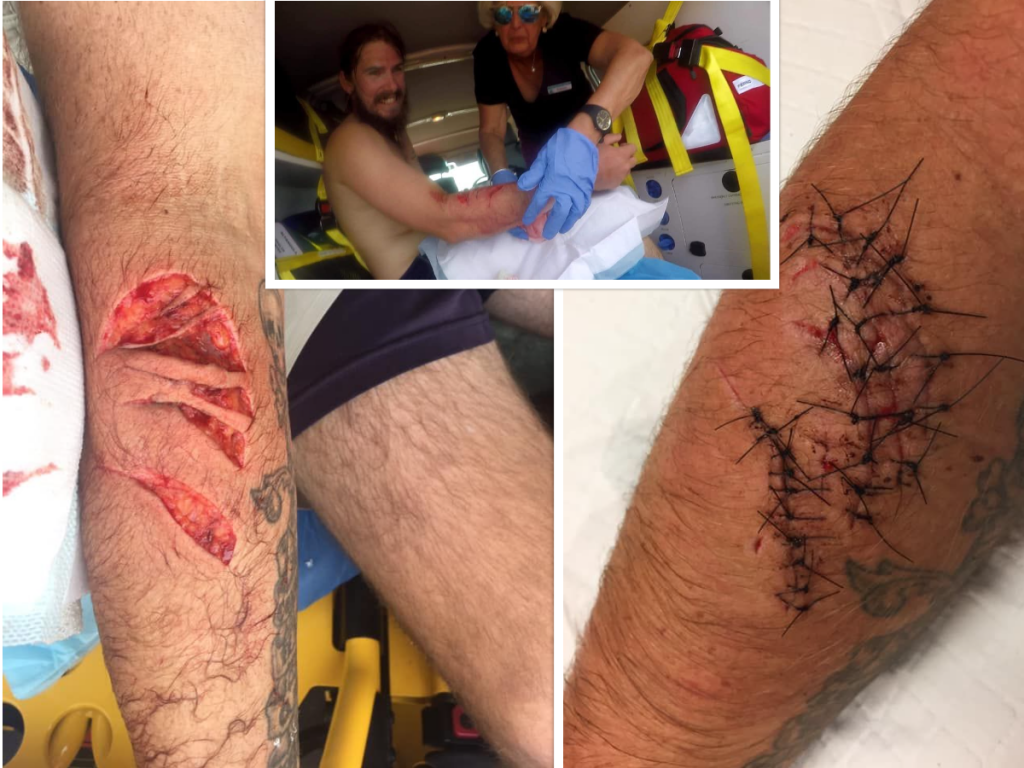 Managing the risk of Shark attack 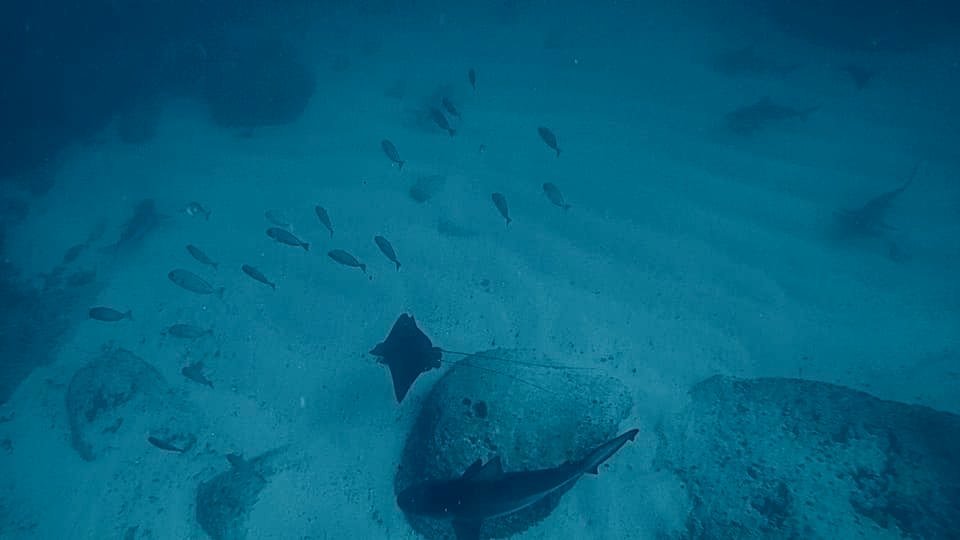 “6 Bullsharks waiting for me to shoot something on the Tweed, NSW Australia coastline.” – Damian Mckay

Being shot by a Speargun

Spearguns shoot 7mm steel shafts under power. A shaft can go through a person just like it goes through a fish. While it sounds like a silly mistake, this one is more common than you think.

Sometimes it’s swimming with a finger on the trigger, other times it’s misidentifying a person on the bottom in poor vis. The spearo see’s movement and squeezes the trigger, bang he just shot his dive buddy. At other times it can be hunting a fish in a big school on the surface and not paying attention to your mate who is behind the fish. Also, speargun trigger mechanisms occasionally fail. 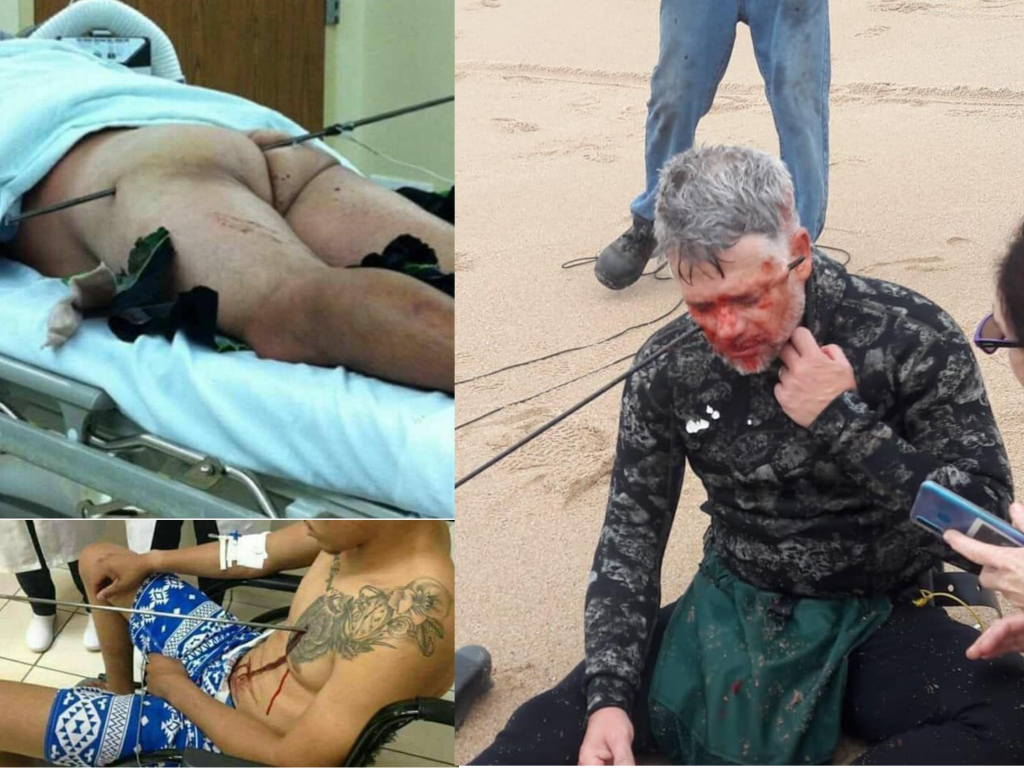 Managing the risk of spearguns

Pulling in a big struggling fish, subduing it with a hand in the gills and then positioning the fish in a way so that you can reach down and grab your knife is an acquired skillset. Once you get your knife out the risk increases. Knives in general are risky to handle, combine that with moving boats, struggling fish, awkward gloves and gaps in concentration and you can quite easily get stabbed or badly cut. 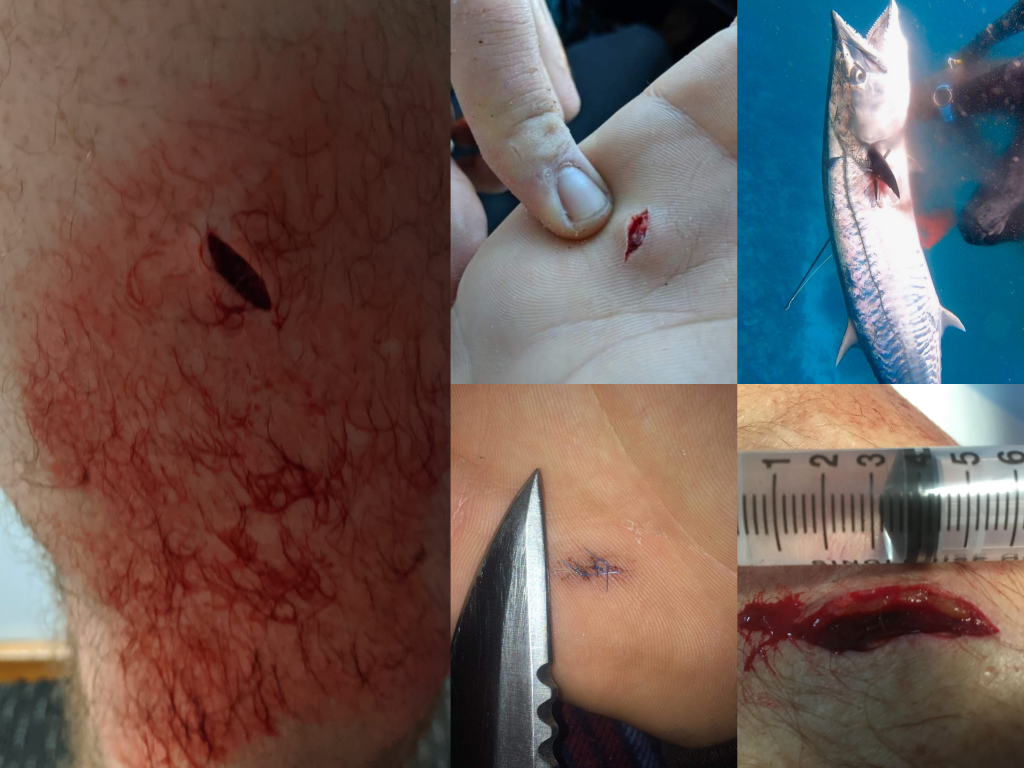 Managing the risk of knives

Rhys from Noob Spearo Community on Facebook “I’ve got a doozy. I took a good mate out for an epic days diving in my tinny. Big run up the coast and the weather blew right up. But the fishing was super on. One of his first times going ‘boaty’ and we jump in. Spanish Mack’s everywhere. Miss a big one and look up and the boat is nearly out of eye shot and drifting with the wind. We swam for a good amount of time to catch up to the boat screaming “throw out the anchor”. Nearly swam to the headland some 3km in. Got to the boat and the motor wouldn’t start. First thing I checked was the bloody safety lanyard (kill switch). Needless to say I now have a bit of a motor starting speech for all new divers on my boat!”

This story clearly illustrates a scenario in spearfishing that can happen quite easily. New spearos can often be new boaties and so they may need some training before being left alone at the helm.

Managing the risk of becoming separated from your vessel

Grouper and large Cod species are the bullies on some reefs and wrecks. The are highly opportunistic, don’t fear divers and will compete for fish. Barret gets off lucky here with a laceration and some good footage. when Grouper are around, be prepared to fight for your fish!

Kina have nasty spikes as do many fish species. If you get spiked and don’t get the spines out an infection is inevitable. Treatment for a sea urchin sting removal followed by soaking the site in vinegar. This will dissolves most superficial spines. If pain persists OR you can’t remove the spines, seek medical attention. 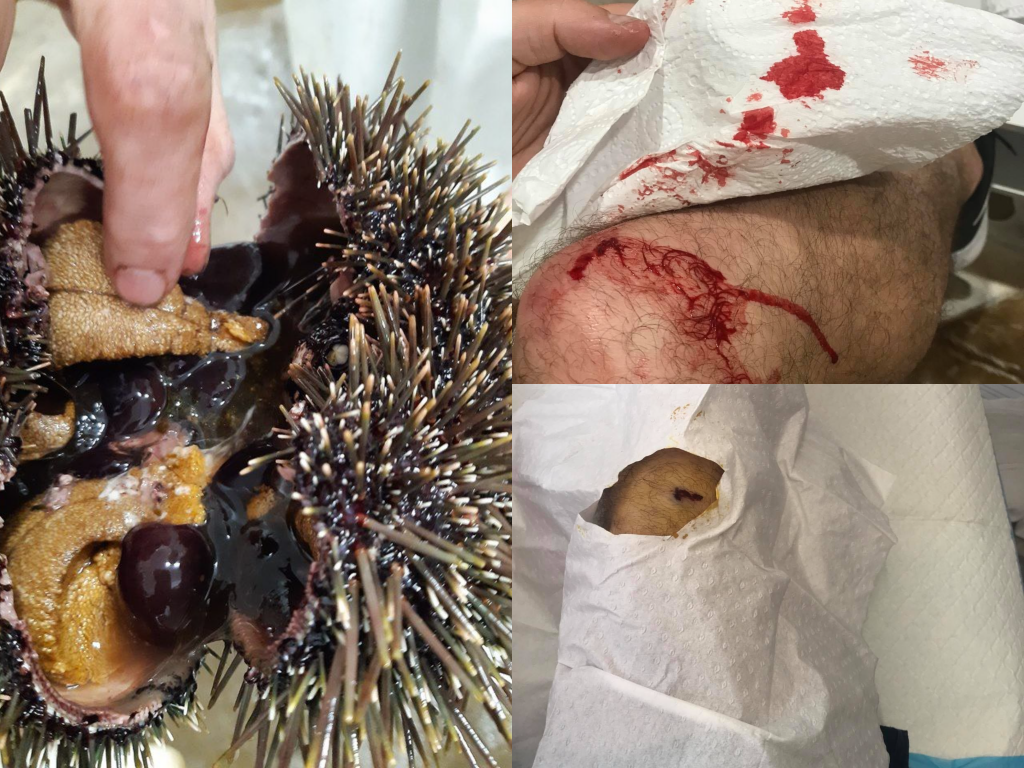 When you spearfish in the open ocean, you will encounter Jellyfish and Marine Stingers. Prevention is better than the cure so wear a full wetsuit or stinger suit in tropical waters.