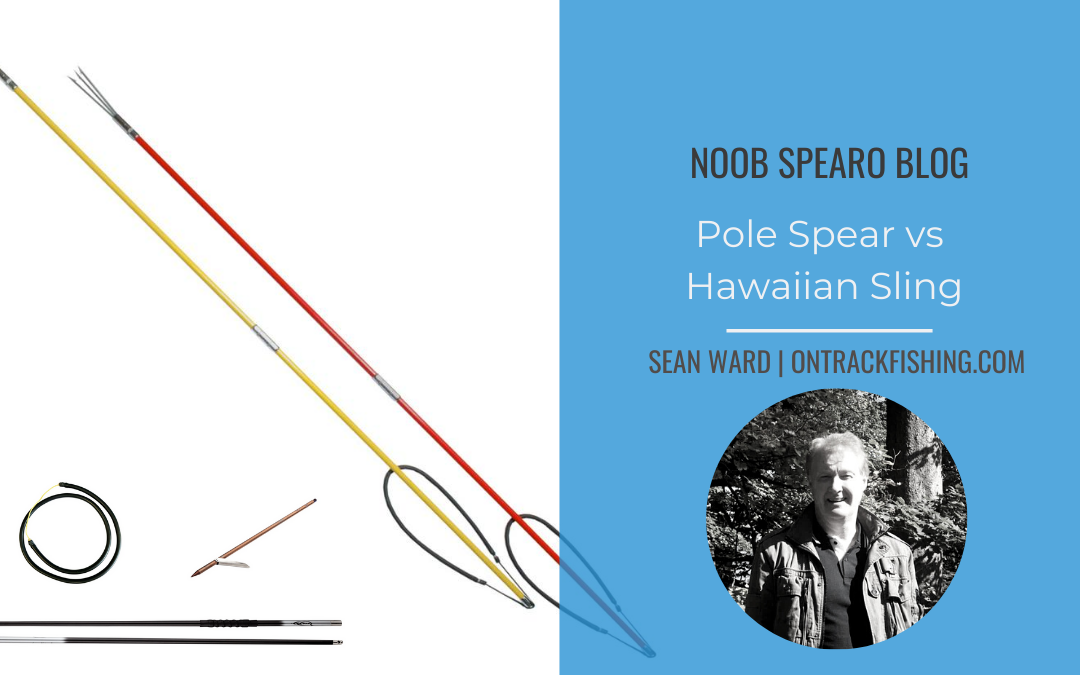 Although this is one of the most primitive methods of fishing, there seems to be a ton of gear you should (or may want!) to have when you head out to the water.

Understanding the difference between all the gear can be downright mind-boggling. One of the most commonly used weapons when it comes to spearfishing is the Hawaiian sling, often referred to as a pole spear. When it comes to the Hawaiian sling vs. the pole spear, don’t worry – it’s essentially the same thing. Although you might hear either term used, they are more or less interchangeable concepts. That said, there are a few key differences between the two to be aware of.

Here’s what you need to know.

What is the Difference Between a Hawaiian Sling vs. Pole Spear?

A Hawaiian spear is more or less the same thing as a pole spear. However, a pole spear generally has a sliding grip that moves with the pole, while a Hawaiian spear does not. Hawaiian slings and pole spears both use a band or sling to fire your spear shaft, but they operate in slightly different ways. The Hawaiian sling uses a wooden shooter (other materials are sometimes used, though wood is the most common) and a high-powered rubber strap to fire a spear shaft in a forward trajectory. If you’ve ever used a bow and arrow, the concept is more or less the same. You’ll hold the shaft in place while you prepare to shoot with a connector (spear holder) on the tubing. You can use this to attach to the end of your spear.

A pole spear, however, has a tough band or sling that is remarkably durable and resilient. This band is attached right at the end of the spear and meant for launching. Often, pole spears are referred to as three-prong spears. They are usually made out of fiberglass and have rubber tubes at the end for added durability. You may also be able to find a hybrid pole spear, which is made out of two different kinds of materials (usually aluminum and one other kind of material to provide durability along with flexibility).

Both tools are known for being lightweight, but Hawaiian slings are generally a bit more lightweight. Also made out of fiberglass, they can also be carbon fiber which occasionally adds a bit more weight.

The average Hawaiian sling will be around five to eight feet, although there are some oddballs out there that can be a bit shorter or longer. You can also modify your sling, as you gain more experience with spearfishing, to be a bit longer. Shorter Hawaiian slings have their place, though, as they’re excellent when diving into close, compact areas. A lot of people don’t use Hawaiian slings and prefer to use a speargun when going after large fish, as a hawaiian sling doesn’t have quite enough chutzpah to make a difference. That said, pole spears aren’t the biggest either, so you may have to consider whether either of these tools is ideal for the fish you plan to go after at all.

How Are Hawaiian Slings and Pole Spears the Same?

Both Hawaiian slings and pole spears are popular fishing tools if you plan on freediving near reefs or along the coast. Both are also easy to use and convenient to carry around with you. Neither are very expensive, so they offer a great way to start spearfishing if you’re on a budget. Both Hawaiian slings and pole spears are great for beginners. If you’re new to spearfishing, both of these tools will help you get off to a good start by themselves. You can also use them as a supplementary weapon if you have more experience and just want a bit of backup.

Tips for Using a Hawaiian Sling

Using a Hawaiian sling is easier than you might think.

Fit your spear shaft into the shooter with the tip facing away from you. Put the dull end of the shaft into the holder on the rubber sling. Avoid stretching the sling until you’re ready to shoot. Once you’re ready to shoot, pull back the rubber and shaft with one hand while your other hand holds your grip on the shooter. Hold steady, just as you would draw the string of a bow. Release and the shaft will propel itself forward, hopefully into the fish that you’ve been aiming at. Then, you can pull the string back to retrieve your kill. Be careful not to pull your rubber too far down toward the spearhead. This can cause unnecessary bending in your pole, which can lead to inaccuracies when you’re shooting at fish. You need just enough tension to get a good shot but not so much tension that the spear starts to bend. Remember, you’re going to be using this tool just like you would use a bow and arrow. 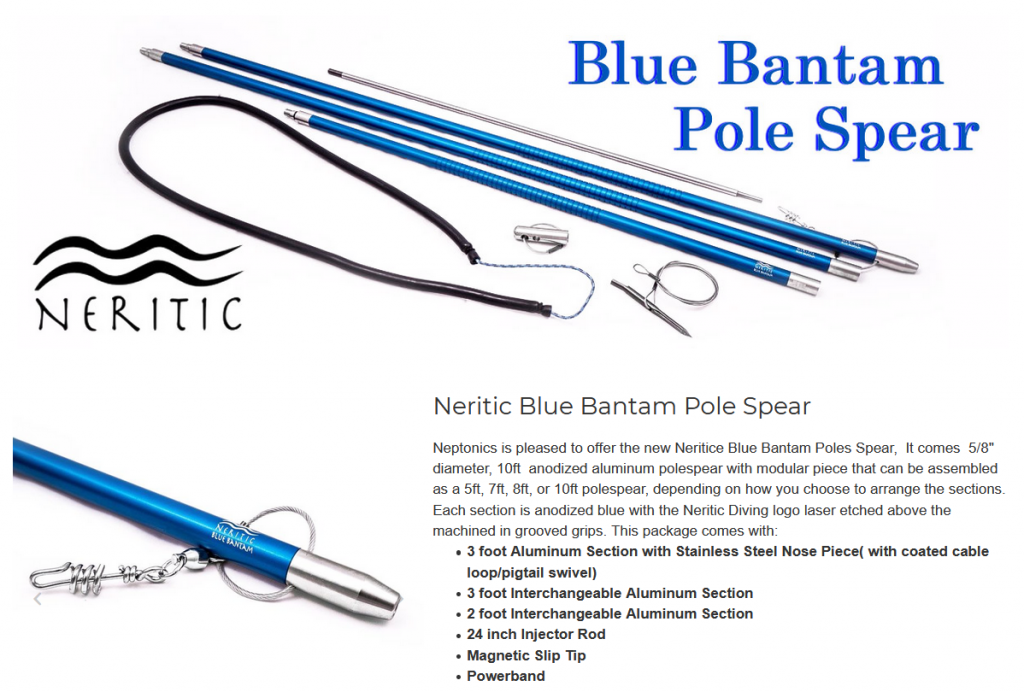 Tips for Using a Pole Spear

Pole spears are also quite easy to use.

You will hook a rubber loop or sling onto the butt end of the pole spear, using your thumb while also using the fingers on the same hand to reach up the shaft toward the spear tip. This movement will create tension. Try not to place your hand too high or you’ll bend the spear, which can cause issues with your aim. Grip tightly, holding tension while you aim. Then release to shoot and pull back the spear to retrieve your fish. One thing to keep in mind, though, is that pole spears are equipped with replaceable tips that need to be swapped out from time to time. This is because the constant wear and tear on the spear can really take its toll. Fail to maintain your spear and you won’t be able to shoot quite as accurately.

You can choose from a variety of spear pole tips, including single and three-barb units. With both a pole spear and a Hawaiian spear, you are going to want to avoid holding your pole cocked and ready to fire. Instead, keep the band looped around your hand yet not stretched out entirely. Although there’s nothing technically wrong with doing this, you’ll be wasting energy that you should be saving for the rest of the hunt.

Which One is Best – Hawaiian Sling vs. Pole Spear

Ultimately, it doesn’t matter whether you choose to use a pole spear or a Hawaiian spear. Both should get the job done nicely for you and both are relatively easy to use.

Deciding which one to use will come down to your personal preferences and skill levels. Neither is necessarily easier to use, but some people have an easier time with the Hawaiian sling while others much prefer the style of the pole spear. Hawaiian slings often have better range and are more enjoyable to shoot – at least, that’s what most of their enthusiasts say! That being said, pole spears are often viewed as more effective when you’re fishing for larger species in deep water. No matter which kind of tool you choose for your first (or hundredth!) spearfishing experience, make sure you practice before you head out into deep water. Ideally, you should spend some time practicing in shallow bodies of water to get used to the techniques involved in the craft. With both of these tools, you’re sure to have a lot of fun. However, it’s also easy to get hurt if you don’t have enough practice and you aren’t careful.

With a little bit of practice, you’ll be spearing fish (and having a blast doing it!) in no time.

This is a guest post by Sean Ward the man behind OnTrackFishing.com

On Track Fishing helps anglers above and below the water catch more fish!

Pole Spears | Why I Said No
NSP:039 Kimi Werner the Vagabonding Speara