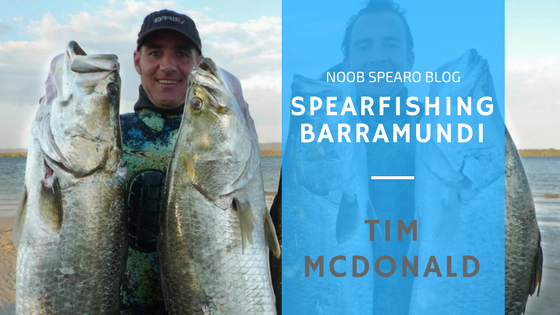 “if you’re a QLD diver and you want to shoot a Barramundi, head north in winter and that’s your best chance to shoot a barra in water that’s clean enough to dive”

Spearfishing Barramundi can be a challenging prospect. These fish inhabit tropical and subtropical estuaries. The problem with that is inshore waters in the northern parts of Australia typically have poor visibility and also house saltwater crocodiles. Typically the visibility of inshore water along the QLD coast improves during winter giving spearos a window of opportunity to spear a prized Barramundi.

According to Tim McDonald big Barramundi can’t survive temperature changes. During winter the temperature in the top of creeks where they normally inhabit can drop overnight which can be deadly for Barramundi. The Barramundi therefore make their way to the mouth of rivers or inshore reefs where the temperature is more stable. Fortunately for the spearo the water clarity can be much improved. 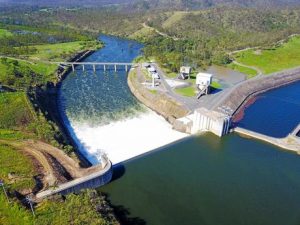 During the record 2011 floods in Qld many of the Barramundi stocked impoundments on the east coast became full to capacity and spilled over their spillways. Along with the water went thousands of fat impoundment barramundi. These fish made their way into estuaries along the coast where they became fair game for spearos. Many dams hadn’t spilled over for a decade and were plentiful with lazy freshwater Barramundi normally inaccessible to spearos.

During this period Tim shot one of these impoundment Barramundi 118cm long, just 2cm under the legal maximum length. The fish weighed 21.5kg . He says a true saltwater Barramundi would have only weighed between 18-20kg. 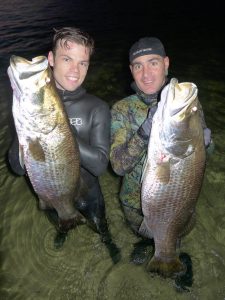 When we asked Tim how to approach Barramundi on an inshore headland he said that Barra will be very flighty and difficult to approach due the fact that they have likely seen plenty of spearos during the winter. In isolated areas Tim says they are often much calmer to the point where they can be shot from the surface.

“In those areas where they’ve been chased around and probably seen a hundred spears fly at them over the course of the winter, definitely approach them from the bottom”

It takes trial and error to find where around a headland or inshore reef the Barramundi are going to be. Tim says guys then need to learn where they’re going to be. He recommends starting with places where the Barra can hide as they love to hide.

I know a lot of guys would love to pick the brain of Tim MacDonald. Well we did it for you. We speak with Tim all about three big species but even more importantly we get into the mindset of Tim and how he breaks down fish and their behaviour. You will love this one!! A big thanks to @timothy3mcdonald we had a ball!! #spearfishing

Once you’ve worked out where the Barra may be holding up Tim recommends approaching from the bottom as quietly and stealthily as possible. Swimming up to a spot on the surface will mostly always spook the fish and you won’t see them again.

“If you have four or five metres of visibility hunting Barramundi you’ve done really well. Predominately our Barramundi hunting is in 1-2m of vis”

“Having the mental strength to hunt really dirty water is something that is key to making a really good spearfisherman. Most guys get distracted. You could be swimming around for two hours and not see a Barra and then bang he’s right in your face when you haven’t got your finger on the trigger and you’re not ready and you just blew your moment. 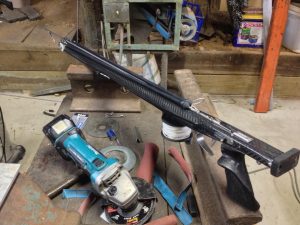 Tim uses custom gear when hunting Barra. The combination of large fish, in dirty water requires a short powerful gun. The Barramundi is also renowned for its large thick scales that can be very difficult to penetrate.

Tim uses a custom 70cm Roller, 18mm bands and heavy 8mm shaft that is extremely sharp to penetrate tough Barra. This little Daniel Mann creation above is a prime example. More on Daniel Mann and his guns here

It’s clear that Tim uses predictable life cycle and weather patterns to give himself the greatest possible chance at shooting a Barramundi. It’s clearly not a year round endeavour but a seasonal challenge that takes a little planning around the weather and ocean conditions. The dirty water and poor visibility are another challenge for the spearo’s nerve and patience. 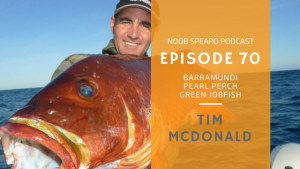 A big thanks to Tim McDonald for chatting with us and sharing his knowledge. Also a big thanks to whoever took the pics in this story. I pulled them from Tim’s facebook account and I’d love to credit you. I know a few have to be Daniel Mann’s , Thanks Mann it must have been an awseome couple of winters for you guys!