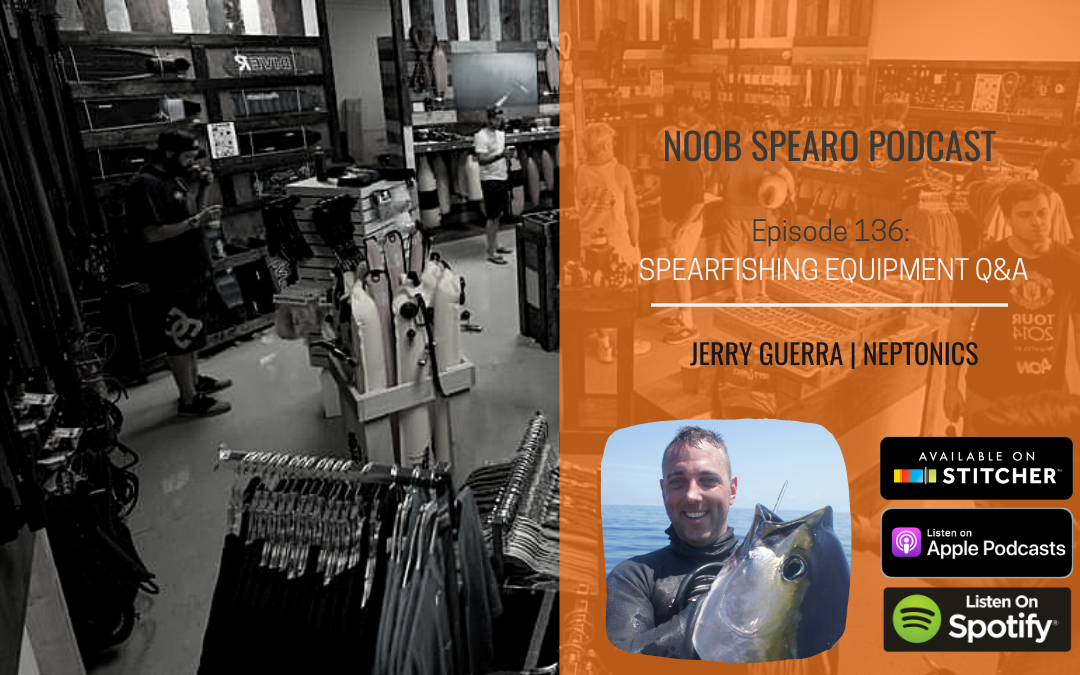 JP Freediving “I love it mounted on the gun. I can’t see where the cameras pointing properly when its on my head. I lose good shots of what I’m shooting and with the gun unloaded after shooting a fish its good to hold it like a selfie stick with the catch. Also when swimming up the camera moves on my Hollis goggles. I tighten it up more and it snaps the mounts when I’m swimming.”

Bob  “Yeah. But the way the gun is designed is a pain. A good clamp on mounting option near the trigger on the bottom of the handle would be amazing. That way its out of the way of everything.”

JP Freediving “At the beginning (of my spearfishing) it was the floatlines or reel lines. After some time you read the current etc, but only after turning yourself in a knot bag🤣”

29:30 How to develop a brand new spearfishing product. From concept to creation.

34:00 INNOVATION IDEA Bob “What id love to see developed are pull cord floats. Same inflation system like life jackets. Attack it to your belt and when you attach it to the gun weather its 1, 2 or 10 when the gun gets ripped away they pull off the belt and auto inflate. You can adjust the amount of floats you think you will need just before shooting by clipping them on or not. Replace the cartridges once used and go again.”

Chad Mathis identified this Carter Inflatable Float on the market and I notice Neptonics has a similar inflatable float. Can you fill me in on their uses?

“Sorry for my English I hope it was clear enough.”

Chad “We all know that gun length as in band stretch has everything to do with power. That has everything to do with how long the band has to accelerate the shaft and that is why a longer gun even at the same amount of pull on the bands will shoot harder/farther than a shorter gun. On the human side of it we are only so strong. Here’s the point I’m trying to get to. Using the strongest bands I can cock a 16mm will have to be longer than a 14mm. So the 14mm will actually have the longer band stretch and that will give it a longer acceleration time on the shaft. In the real world I don’t believe a multi rubber gun with 14mm rubbers gives up much to the same gun with 16mm rubbers because of the difference in band stretch with the more rubbers the less advantage the bigger rubbers have. Taking into account the maximum force I am capable of or want to be pulling. What do you and your experts think about that?”

@mathieu_daiku “Roller guns shooting low!! Almost all rollers I have used while hunting and tested in the pool shoot low! Many theories have been developed like inertia of the bands flipping up the muzzle but no definite solutions have been found. Please unravel this mystery!!!!💪🤙🌊”

Chad  “Consistency! being able to hear with my spearguns some days I can’t miss and some days I cannot hit. It seems the harder I try the worse I get and I understand that I need to just trust my instinct but it still happens.”

@Crisalbi “Straight shaft! Even new one from time to time aren’t straight.”

@Tommy_dozz “Power to weight ratio for rubbers and shafts per gun lengths. Is there any kind of rule to be followed?”

Shorter spear = lighter spear = quicker spear. Without having to reduce diameter and increase flex. HOWEVER overhang is not really a ballistics issue is it? We have the same overhang from a hunter aiming POV don’t we?

@the_spearfactor “The perfect combo of bands to shaft size. Also, wt of gun per # bands and size of shaft.”

Jason Harris mentioned the Coatesman Test Vid in the Rob Allen Dive Factory: Basically they setup a test rig involving a load cell with a digital readout and they ramp up the pressure on a variety of line and know setups. The results were different than I expected.

@Tazyarns from Yarns with Az and Taz Podcast says “All the systems to reload are time consuming, as you can tell, I miss a lot 😂”

Jay Galloway “I’d like to hear a convo on mono vs dyneema vs spectra shooting line.”

@Killshot_spearguns “Dyneema versus Mono for shooting line…pros and cons of each.”

@Shannon.lewis.1023 Rubber replacement, make your own or buy from the shop.

@Onebreathonedeath “Most reels can and will jam.”

@Sinkphase: “Fins! I hate having to buy fins before kicking them to test them out.”

Find all links mentioned at noobspearo.com/jerry2