Spearfishing with Crocodiles, Near misses and lessons learnt 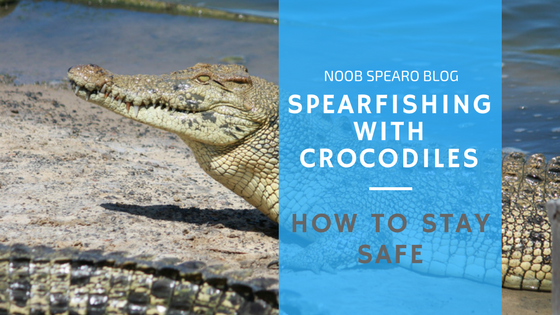 ‘Spearfishing with crocodiles? You must be crazy!’

That’s what I thought when I received a question from a listener inquiring about tips for spearfishing with crocodiles. Dane who recently moved to East Timor asked me if I had any advice for spearfishing in Crocodile infested waters. To be honest there was just radio silence in-between my ears on this one as I’ve never dived around Crocodiles or even contemplated it. Dane told me that the local Timorese do it all the time and according to their local beliefs, the crocodile represents the grandfather spirit of their creation and as long as one has a “pure heart” grandfather will not attack. Unfortunately I’m about as pure as Fukushima harbour, so I wouldn’t expect too much discretion from the local handbags. So instead I got in touch with a very experienced Croc country diver from Zimbabwe who now calls North Queensland home. 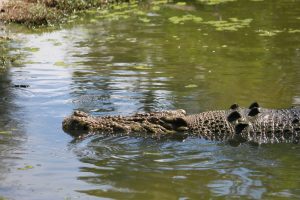 Rob Gates, My first interview with someone experienced in spearfishing around Crocodiles

Rob Gates a national spearfishing representative who has dived the Crocodile infested waters of Lake Kariba for many years and has had his fair share of encounters with the toothie critters. On one occasion Rob had taken the South African Spearfishing team to his favourite spot in lake Kariba to hunt Tilapia.

Whilst underneath a stand of floating weed known to the locals as cabbage Rob felt a tug on his fin. “I looked down to see this 10 foot long female Croc just gnawing on my fin blade”It soon had Rob’s ankle in it’s mouth but he managed to get to his knife and attempted to stab the crocodile in the head. ” I pulled my knife out and stabbed it on the head but it did nothing, it was like prodding a table” The tough skull of the Croc couldn’t be penetrated. Realising his attempts were futile Rob pivoted and stabbed the Crocodile in the throat. The Croc released Rob immediately but it wasn’t finished with him yet.” I thought it was going to roll off the knife and gaff it (leave), so I pulled the knife out but that was the wrong thing to do, it just pivoted it’s head and swallowed my arm”

Rob quickly drove the knife back into the Crocodiles throat causing it to release him. Rob pushed off the Croc  and made for the surface where he inspected his wounds in the boat. Fortunately for Rob he didn’t lose any limbs but ended up with puncture wounds every two inches up his arm and around his ankle.

This wasn’t the first time Rob had had a run in with a crocodile in Lake Kariba. Six years earlier during a qualification dive for the Zimbabwe national team Rob was confronted by a 12ft male crocodile. Whilst backing away Rob shot the crocodile through the collarbone area in an attempt to penetrate the heart and lungs. The big Croc started to shake it’s head trying to dislodge the spear above Rob. Fortunately the spear had done enough damage to force the Crocodile to flee, allowing Rob to get to his boat unscathed. 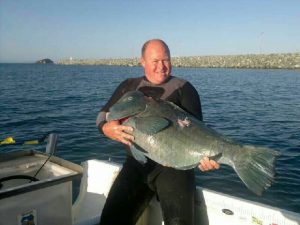 That way you should be able to access a knife in any circumstance.

Local knowledge is a great advantage. When Rob was attacked it was by a female Crocodile that had moved into the area. The locals for whatever reason had failed to tell him. If he had known, the whole incident could have been avoided.

Both times Rob was attacked he had the boat close by. This is practical for a couple of reasons. The first being he didn’t have a lot of water to cover to get to safety. The second is that first aid can be administered quickly if needed.

Rob and his spearfishing mates use a signal where the boat operator keeps an active lookout and bangs on the floor of the boat to let divers know when a Croc has been spotted. When the distinctive sound comes through the water this signals the divers to come back to the boat. Banging on the boat can be heard both under and above the water.

Go for the soft spots

In both instances Rob was attacked by Crocodiles, the defining moments that saved his life were attacking the soft underside of the crocodile. Rob stabbed and shot the soft necks of the crocodiles after trying in vain to stab the hard skull of the Croc.

“If it wanted me, I’d be gone. I had no idea it was there until it was five feet from my face”

Rob’s not the only one to have a close encounter with a Crocodile. I recently chatted to another North Queenslander Cameron Bourne, an outboard marine mechanic from the small seaside town of Cooktown. Cameron went for a shore dive one day for some Mangrove Jacks and Crayfish. Cameron says he usually checks the water for crocodiles for half an hour but on the day of this story he admits that he got a little excited and just got in and started swimming. “I popped my head up from a dive and there was a set of arms hanging in the water. I thought it was another diver at first but then I realised I  had a massive Croc about five feet from my face”.  At this point Cameron was about 100m from the shore with the big Salty around 4m long, just meters from him. “I laid on on my back really slowly and pointed my gun at it’s face and kicked backwards the whole way back into shore” The Croc followed Cameron the whole way back into shore where it stopped about 10m from the shoreline and started to growl. Once Cameron started to walk back to the car the big saltwater Crocodile proceeded to follow him from the water and accompanied him for the 100 meters back to the car. 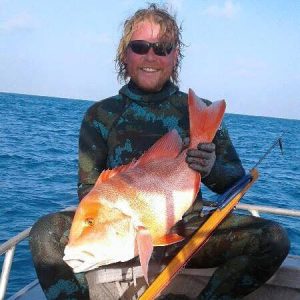 Dive from a boat and  avoid shore diving

Once Cameron was in trouble he had to swim 100m on his back to get to safety. The big salty could have made a move at any time and Cameron’s attention was all on the Croc, what could have happened if there were more Crocodiles in the area? He was also forced to traverse the shore which is a known ambush area for salt water crocodiles.

One in the boat and two in the water

Cameron only boat dives now. Exclusively maintaining a strict system consisting of two divers in the water, so that they can scan the area and a dedicated boatie who keeps watch and signals them should he spot a Croc.

Cameron usually scans the area for Crocodiles. He spends 20 minutes watching the area for any Croc activity and moves on if there is. The urge to get straight in must me ignored.

Spearfishing with crocodiles is extremely dangerous and its not something I’m going to take up any time soon even though my wetsuit is brown. Both of these guys were very lucky that they lived to share their stories but others haven’t been so lucky, so please respect these animals and take caution when around their habitats.