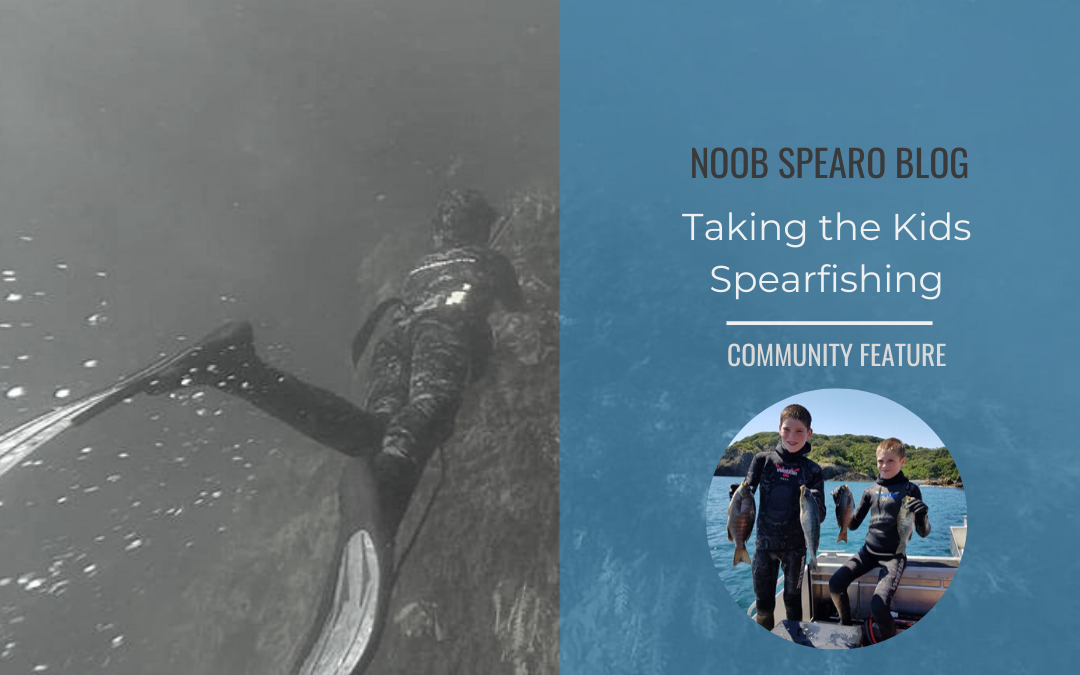 This post is an email that Don sent me with regards to taking his two boys (Max 10 and Ben 12) spearfishing. There is a heap of practical and actionable advice in here for anyone wanting to take their kids spearfishing. Don goes on to share a great poo story at the end (my fav). Enjoy!!

I hadn’t been in the water for 20yrs since instructing to which I was a master scuba diver trainer with PADI, a Nurse at work asked me if I wanted an old OMER caymen 75 she’d found in her garage. I’d been wanting to get the kids in the water for some time and so dragged out my old gear. When the kids started it was incredibly basic; an old torn 2mm steamer each, old rubber fins from the 70’s and a yellowed silicone mask each out of a moldy gear bag. I also took my old Tecnisub pneumatic gun with us and was surprised the old girl still worked. They were keen as to give it a go although somewhat nervous and we took a trip to Kaikoura. After gearing them up I jumped in and coaxed them in and we swam around in some shallow calm water, two wide eyed leaches stuck to each side of me, it turned out to be really fishy and hands started pointing  everywhere and I had to stop every meter to decipher “Sorkillian” or answer questions or look at something someone was yelling about.

A bit further on the monster was created; I smacked a huge Butterfish right in front of them. They went apeshit, I was forced back to shore to swap guns and hell or high water they were going to have a go. I gave them a quick how to and took them out one at a time holding onto their elbow and they swam over many fish but I just went with it. The older boy Ben managed to corner a big banded wrasse and let fly. He was stoked and still talks about that fish, he shot another before it was wee Max’s turn. With a mask half full of water and his fins coming adrift max shot a tiny blue moki. I didn’t have the heart to take his fish off him so we got a quick photo before I had the chat to them about under size and shooting fish they can’t use. So it wasn’t wasted we jammed it in a crack with juvenile crays. we just dived unarmed for the rest of the weekend and I was able to show them heaps of sea life, the end of every dive they were shivering, blue but still took some getting out of the water. 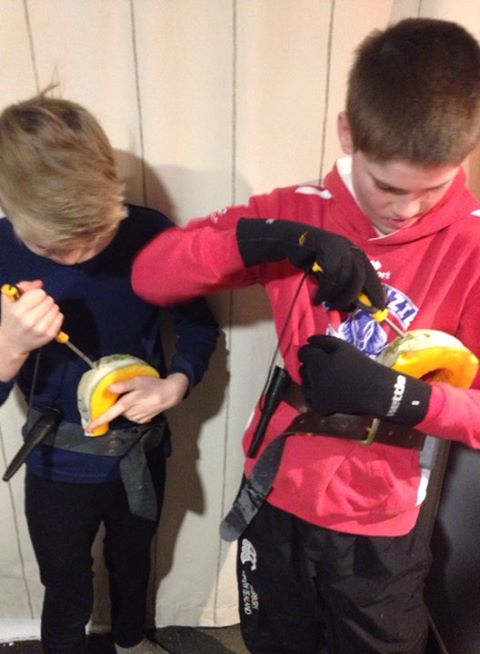 Max and Ben practicing Ike Jime. Don “boys decided that they wanted to take care of own fish, caught them killing pumpkin, bloody great idea as about same thickness as fish head 😂😂”

As they seemed keen I got some better gear, good 5mm suits, modern fins and a decent mask each. We did a trip to Dunedin and went for a dive in the harbour no fish shot this time and Max was mesmerized by a small octopus, I never let on to him but a bloody big stingray was mesmerized with Max. I didn’t turn him around for a look in case to put him off. At this stage I was still holding on to them and swimming them around mostly where they could stand up if needed, next day we happened to go to shag point on a simply epic day and both boys totally transformed. They started swimming beside me and in deeper water and shot 4 big butterfish each. Both boys were still surface dwellers at this stage with Max having a life vest over his suit.

A holy shit moment came when I was quietly following Ben when he dived down kicking like mad about 2m and I heard the gun go off, next minute he’s wrestling with a nice blue moki. That fish wasn’t going anywhere he was clinging onto it and I tried to help; it was like trying to get a piece of chicken of a cat. We did a few more trips around the area with Philip Van Zijl and learnt heaps, he’s awesome. We were still very much noobs, Ben was now weighted and reloading himself and both boys were starting to be comfortable with rougher and deeper water. 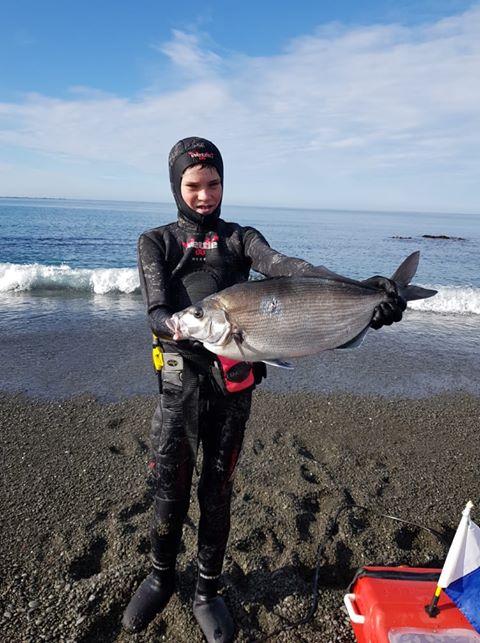 In December of that year I did the unthinkable and took them up to Auckland and Darren Shields took us out for the day, the kids had never been on a boat before let alone dive off one. This trip locked in the monster, they soaked up everything and they regarded themselves as real spearos. Ben had spent his pocket money on some wettie reef freedive fins and simply took off dropping down 3-4 spearing and securing fish. He would have shot a big kingfish that look an interest in him if I hadn’t headed back to the boat with the gun to unload a fish. Both boys got 3 parore each and got a photo with a big snapper that Darren shot. Next day we headed out to Goat Island reserve for a look and it was a nightmare getting them out with all the snapper around.

I ended up getting a wee Mac360 boat with a 15hp and they keep soaking up the knowledge. They entered the Kaikoura big 5 spearo comp as their own team I was just safety diver. We aren’t really comp folk but I wanted to get them to start working as buddy team, I limited them to a fish each to weigh in and they did really well, it was quite funny these two little guys rock up among all these experienced spearos.  They got called up to get photos with the winners who handed them part of their prize winnings, a new gun and a catch bag. It was a very cool gesture. Ben wanted to get another species that weekend and did a perfect breath up and drop to 7m, I saw him aim at something and came up as cool as a cucumber with the blue moki in the pic I sent through. 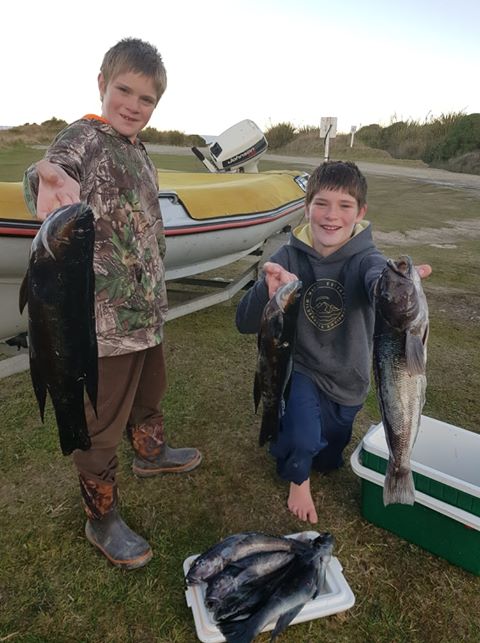 A FEW NOTES ON GEAR AND RULES FOR KIDS

Get them into freedive fins as soon as you can, I though they may be too much to handle but they seem to do well with them, saw a big transformation. Ben immediately started dropping to 15-20ft comfortably

Touchy subject for a spear fishing parent and a serious one to weigh up, kid to kid

Hopefully some of this info may be useful. 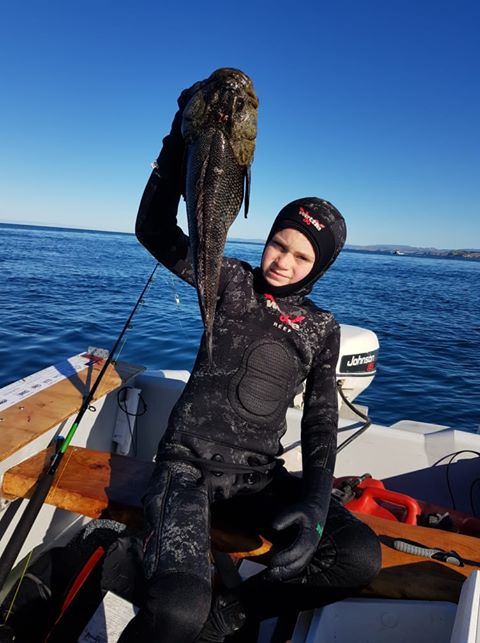 Now what you’ve really been waiting for!!! Poo story.

When I was instructing bubbles, myself and a mate got invited onto a luxury launch. This boat was pristine, the owners basically handed us white soled shoes as we boarded and followed us around making sure nothing was touched, even re-arranging magazines we had read to the original position and layout. We were terrified to go to the toilet on this boat, but after 3 days things were backing up. On the third day I said to hell with this, I need a crap, 3 days worth was satisfying to get rid of. When I came out my mate pushed past me saying look out this is going to be huge. Little did we realize that my effort had blocked the system! He came out very white faced saying “it won’t flush, it won’t flush “panicked we came up with a plan and proceeded to covertly undo the back of the system to clear around the shredding fan that cuts up everything and sends it out the bottom of the boat. This was done with a piece of wire we found. All was going well until all of a sudden the blockage cleared and shit and paper started pouring onto the floor. My crap was fine but when my mates came through I started to dry reach and leant on the wall hitting the switch that activated the still exposed flush /fan. Within a split second there wasn’t a square inch of that pristine bathroom that wasn’t covered in shit, except of course for two human outlines on one wall. It was everywhere and we were covered from head to toe. We both calmly walked through the boat and past the magazine woman in the galley who promptly threw up in the sink. We carried on to the back of the boat and jumped into the sea to wash and let thing cool down a bit. While we were in the water listening to the yelling on board my mate said “gee that woman’s got a soft gut hasn’t she?” We did help clean up and that was the end of our trip.