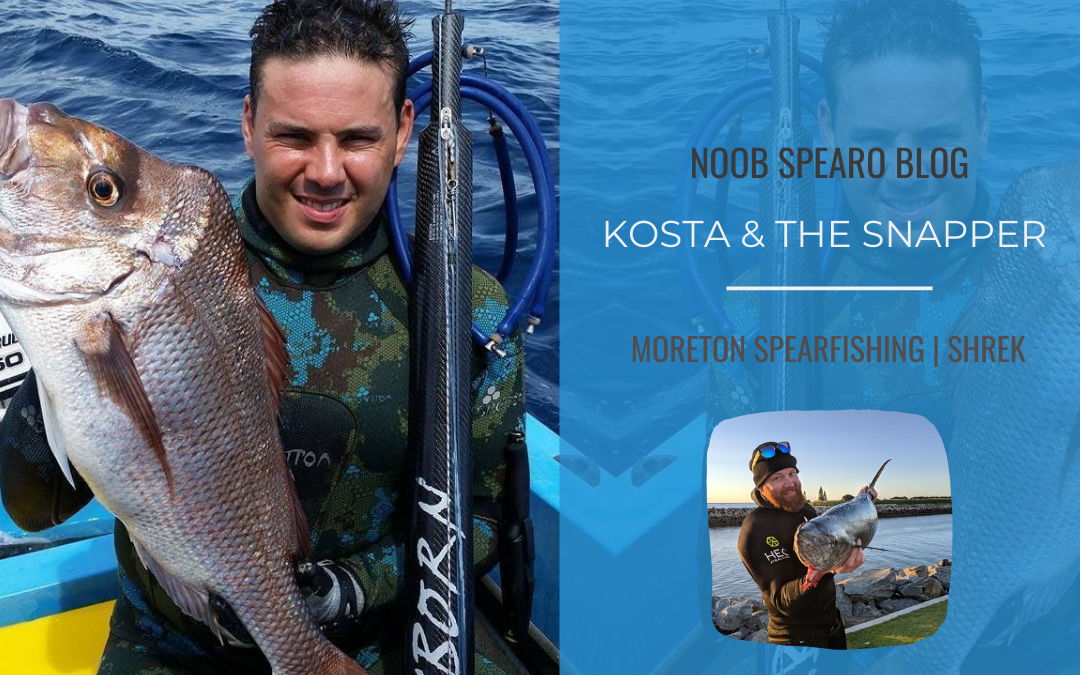 Kosta and a very memorable Snapper

…and I was as frisky as Turbo after his bar mitzvah. What was the day going to bring?
Motoring out the weather was mint. 5 knot variables, slightly overcast skies and a mild swell greeted us as we came around the edge of Moreton Island and headed to Kostas secret spots.
The crew consisted of mad dog Adrian, the infamous Seyoung, myself and the ever scurvy Greek pirate Kosta. All of us had grins plastered from ear to ear, happy to be out chasing fish for a mid-week spearing session.
Being the BFG I took first Boatie duties and each of the boys shot a 7-8kg Spanish Mackerel, although Adrian was still tuning his new Omer 95cm roller and ended up losing his fish to a poor shot. After 20 minutes or so Seyoung kindly relieved me of boat duties and I got in to try and find myself a mackerel, but alas they had moved on.
So we moved to new ground and Seyoung and I eased up the side of a reef chasing some Green Jobfish and Spangled Emperor that were fairly curious, possibly due to the darker skies and the copious amounts of burley Seyoung and I were dishing out. As Seyoung came up from a creeping and scratching effort on the bottom, I spied an interesting silhouette and immediately duck dove aiming at the bottom, 8-10 m up-current of the fish.

Arriving at the bottom I could see that the outline I had spotted was a very absent minded Blackspot Tuskfish. I decided he needed culling from the gene pool and that I would charitably enjoy eating his fillets later alongside a glass or three of Pinot Noir.
On approach I realized he had become aware of my presence. But I was being a sneaky bugger (as sneaky as a 120kg bloke gets anyway) and as he turned slightly to take a look he gave me a great shooting opportunity which I carefully took. The spear entered through the gill plate and exited his mouth, a clean shot and all of a sudden I was on the board. The Tuskie weighed an estimated 6+kg and I was absolutely chuffed.
Shortly after Seyoung took down a Black Wrasse close to the 2kg mark and now our esky was really starting to look colorful. Adrian, Seyoung and I ended up burleying up a few more fusiliers and pumping the flasher to try and encourage some more Spanish, we ended up drawing in a couple of curious Wahoo that Adrian spied, but alas they escaped for Spearos to chase another day.

Pretty soon we moved on to another fishy spot where I took a small Spanish and Seyoung shot a nice Green Jobfish. Kosta had to upgrade us all however with what many Australian spearo’s would put on their most prized catch list. I’ll let Kosta tell his tale.

“I organized a spearfishing trip with my friends Isaac Daly, Sy Kim and Adrian Vo for a spearing adventure of cape Moreton chasing mainly mackerel and a few reef species. After getting onto some Spanish early and with the terrific Tuskie in the esky by Isaac we decided to do another drift on another patch of reef. While the regular reef species were being sited I found and started to hone in on a gold spot wrasse and ended up chasing it across the reef before finally admitting he had given me the slip. Seyoung asked me to jump on the boat so we could move to the next reef further north but I had that feeling – ‘just one more dive’ I yelled out.

As I was breathing up I got distracted by a large sand patch which showed up as I slowly drifted over the reef. The sand patch had a huge school of surgeon fish swimming in and around it and so out of curiosity I dropped to the bottom to peer into the school which contained mostly Surgo’s and a few Morwong. As I cast my eyes left and right over and through the school I spotted a shape that made the hair stand up on my neck. Right there hidden in the school my eye found a peacefully swimming snapper with that easily recognizable knobby head. Oh My God… I wanted to land this one no matter what. I told myself do not rush the shot… because if I miss this opportunity I will never forgive myself.

Be Silent, Stealthy, and Accurate I told myself over and over.

After lining the snapper up I was just about to pull the trigger but a surgeon swam in front of the snapper and so I delayed for just another few seconds and then when I was 110% sure of my shot I gently squeezed the trigger. BOOM I struck the snapper hard in the head and for a second I thought I had stoned it, but somehow it still had the strength to try and reef me. But I put some pressure on it as I knew my shot was good and managed to keep it off the bottom.

I started my swim to the surface with overwhelming joy even though she wasn’t in the esky yet. The shot placement was perfect and she wasn’t going anywhere…….
I couldn’t believe it!!!!  I was over the moon, I knew it was a once in a lifetime fish that I had landed all the while in some good company. It was a day I will remember for a long time.” – Kosta Papadatos 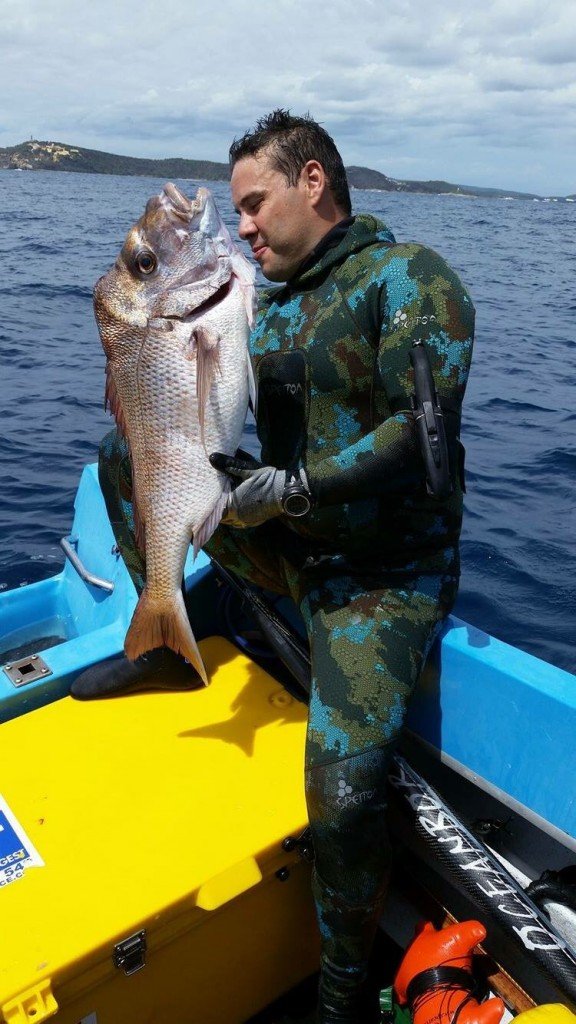 We ended up with 10 species in the esky with 12 fish in total. It was a cracker day out off Brisbane’s Moreton Island and I know I enjoyed the fresh Spanish on the BBQ that night.  As usual these days I neglected to wash my gear till early the next day. I have to get better at that!

Mid week dives are the best! 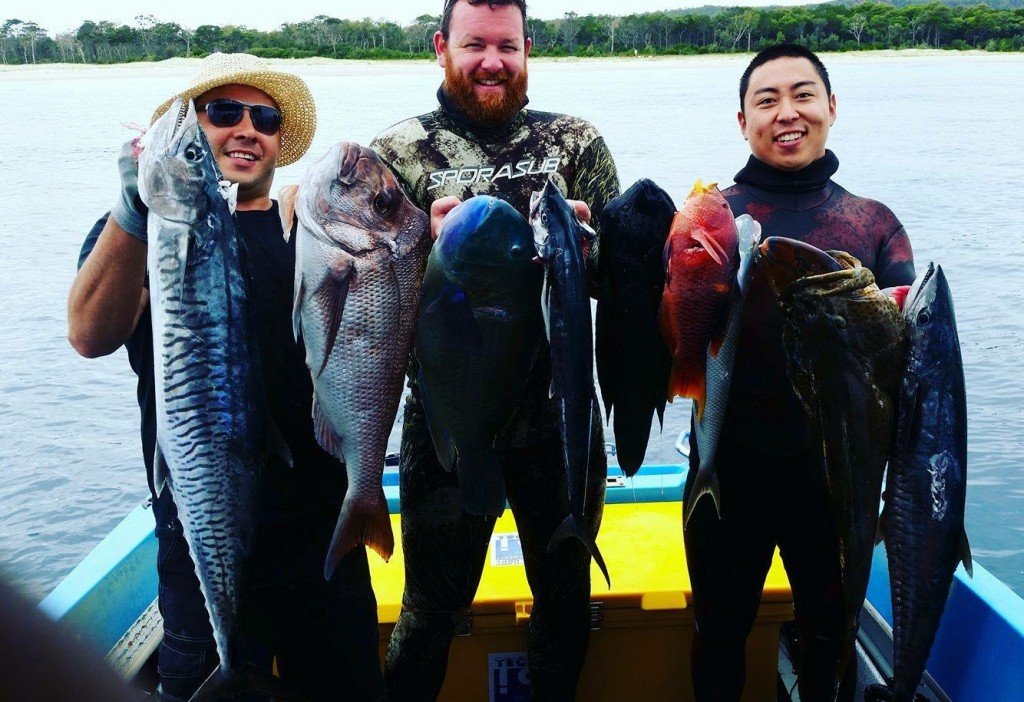