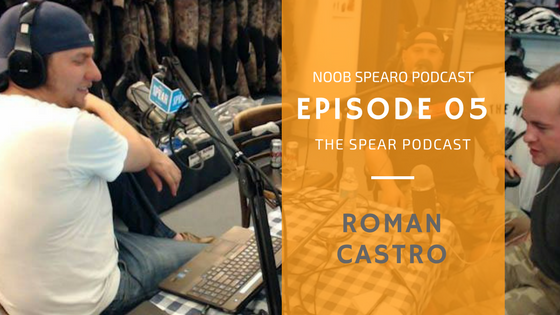 Roman Castro is the president of the San Diego Freediving Club which has over 160 members. He’s also the man behind the spearfishing blog SpearoBlog. He started the blog in 2011 where he initially started sharing his spearfishing adventures with friends, but it grew from there into a resource center for new divers. He shares videos, documents his growth as a spearo, and writes all about spearfishing. Roman also has a spearfishing podcast called The Spear and he has some great episodes up there with Rob Allen. 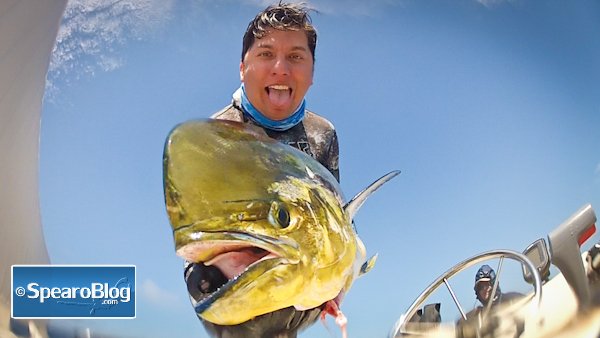 Roman Castro with a cracker Dorado AKA MahiMahi or Dolphinfish.

16:00 Moss Back Members – Spearos who have spent so long in the water moss starts growing

18:00 Veterans Vault, Standing up for our spearo rights 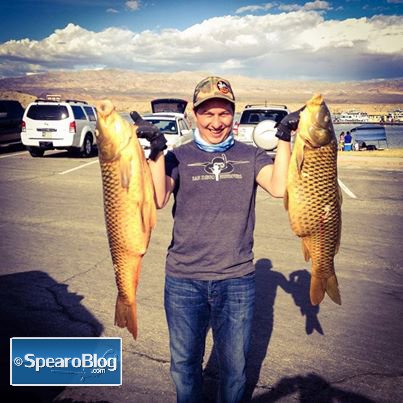 Roman with a couple of huge carp

Here are Romans Fast Five Facts For Noobs – Roman shares a passion with us for helping people get started in the sport so this interview is jam packed with valuable tips and info for the up and coming spearo. Download the episode on iTunes

Shrek: So Roman this part of the show is called the Fast Five Facts for Noobs it’s where we like to ask our guests, [Tweet “if you were starting out spearfishing all over again, what five bits of advice would you have liked to have had, Roman?”]

Roman: I guess the first one, the most important one would be just be calm and comfortable in the water before you start even looking for fish. Because I’ve noticed that when you’re calm, your breath will just extend, you can hold your breath longer. I can hold my breath longer when I’m super calm. That with the addition of making sure you practice your surface intervals so you are breathing for twice as long as you were down for. So that would be one.

Turbo: So Shrek, you’re looking at a minute’s breather, twice your dive time.

Shrek: Oh, you’re suggesting that I dive for thirty seconds, there. Thirty seconds is generally a pretty good dive for me.

Turbo: Okay, Roman, we’ve got that one.

Roman: So for the guys that are down there for thirty seconds, you want to have the most time on the bottom, right? So instead of diving down and looking around on your way down, just go straight to the bottom, and enjoy your 20-30 seconds on the bottom doing some hunting instead of on the way or on your way back up. I guess number two would be go straight for your target depth, don’t dilly-dally in between.

Turbo: I’m going to join you in that,but once we do these fast five facts, we’ll never talk to you about pole spears. I’m getting right into it.

Roman: Especially with the new guys, muzzle control. It’s very important. Muzzle control and don’t load your gun outside of the water. Your spear can travel a lot further in the air than in the water, so it’s just asking for trouble. Part of that would be the muzzle control. If you’re diving with a buddy, don’t have your hand on the trigger, or your finger on the trigger. If you’re not going to shoot, keep your hand off the trigger, hold your gun about midway, and make sure you’re not pointing it at anyone at anytime. Even if the safety’s on, all that good stuff, it’s still best practice.

Roman: I would say, besides the normal always dive with a buddy, dive within your buddy’s limits.

Roman: Dive within your buddy’s limits. What’s the point if I can go 60 feet and my buddy can only dive 30 feet? Something happens, he’s not going to be able to go down there and get me.

Shrek: Alright, I’ll sum them up and give them back to you. Roman said, number one: be calm, get comfortable and that’s a repetitive point we get from a lot of our guests and just learning to relax in the water.

Shrek: Yeah. And you added to that, get your surface intervals right. Number two was go straight to the bottom or your desired depth. Don’t dilly dally in between. Number three was start with a pole spear, and you mentioned many advantages to that. Number four was muzzle control, so don’t load your gun out of the water, don’t finger the trigger, and don’t point it at anyone. And a lot of people that have been trained with firearms know that, unless you’re going to shoot, you don’t have your finger on the trigger. With spearfishing, we seem to treat it like it’s not a firearm, but it is and that’s what a trigger guard is for. You have your finger resting over it, and when you want to shoot, you just pull it back. You only have to move it an inch or 20 mil. And number five was dive within your buddy’s limits, which is great advice because it’s no use diving 20 meters because you can dive 20 but your buddy can only dive 10, and then you shallow water blackout, and he can’t get you.

Roman: That would be it. Can I add a sixth real quick? When you see a fish you want to shoot, don’t fixate on it. Don’t stare at it.

If you enjoyed Romans interview and want to learn more about beginning to spearfish check out this post – its a guide to some of our best articles, interviews and guides for starting spearfishing