Spearfishing Beginner Tips – How to fight and land a Spanish Mackerel 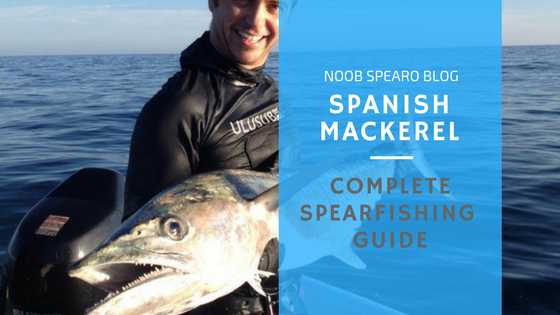 How to fight and land a Spanish Mackerel – Spearfishing Guide 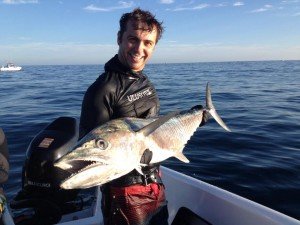 At a rough guess I would say the second Spanish Mackerel I ever shot would have put me in the 30kg club or close to it. Not bad for a shore dive in ten metres of water for a guy who had only shot Flathead and Morwong previously. But alas the Flathead I had been practicing on weren’t in the same league and I just didn’t know how to handle the beast of a fish. I was completely underprepared and overwhelmed and consequently lost the fish. I have learned a lot from that fish and since that day I’ve picked up my game and learned the skills I need to handle these exciting mid water weapons. Here a few basics I’ve found help me to land these fish consistently. 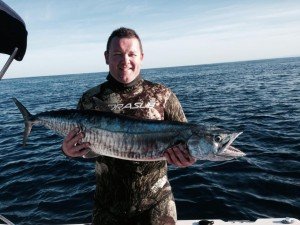 These fish are incredibly soft fleshed and skinned. Couple that with extreme power and you’ve got the recipe for frustrating tear offs. This is why shot placement is so important. There are two places you want to shoot these fish to avoid your spear from tearing out. The first being the head. With all that bone and tough structure the head and gill plate make for a nice holding shot that rarely pulls out. Not only that but if it doesn’t stone (kill it outright) the fish it will slow it down considerably and the flesh isn’t damaged in any way. The second area is the area between the dorsal and anal fin. The flesh in this area has more sinews and is therefore much tougher giving you a greater chance of not pulling the spear. 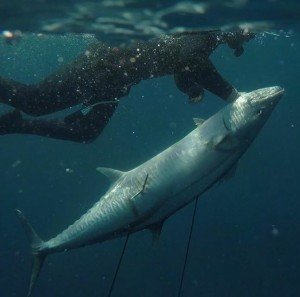 Before or during your dive, or at some stage make sure you’re not entangled in your rig line because when these fish go, they go. I have witnessed a mates rigline get looped around his snorkel with a 20kg plus fish running for the hills and the resulting friction as it bound on the snorkel was an empty spear and no fish. Not to mention the health risks.

Naturally when something pulls hard you often instinctively want to pull hard in return. Well with mackerel that’s the first step to losing these soft fish. Mackerel are a fairly clean fighter preferring open water runs rather than looking for holes and caves to dive into so there’s no need to muscle this guy back to the boat in record time. Let him run and tire out so you don’t risk pulling the spear out. Unless there are curious sharks in tow of course. If you find the fish has ran so hard your back at the float make sure to swim with the float as it takes your weight to reduce the tension on the spear.

If you don’t know where you’re shot has landed play it softly but when you’ve reigned the fish in a bit check how your spear is fairing. If it looks good and it’s not tearing you can apply some hurt. If it looks dicey keep playing it softly and call your dive buddy in to put a second shot in it. Many a Mackerel have been lost in the final stages. Don’t be proud and risk the fish, call for a second shot.

A bungee is a length of rubber tube with a dyneema core that’s used to reduce the shock as the fish takes up the slack and starts it’s run preventing tear off’s. The bungee is usually connected between the float line and the float and can be vital in preventing a tear off. 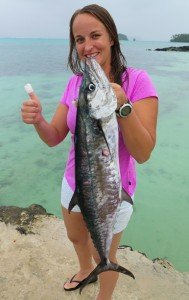 Handle with care! Riffe Diver Jessie Cripps displays whats left of her thumb after this little Spaniard took a bite. 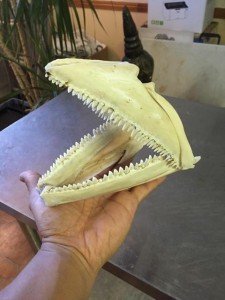 Peter Taing displays the Impressive jaws of a Spanish mackerel.

Once he’s slowed down he’ll probably play possum so be ready for a final run or two. When he’s tired it’s time to finish the job. Grab the spear and control the head. Work a hand into the gills and if need be get him between your legs and wrap him up for the rear naked choke. Grab your knife and stick the brain or cut it’s throat. To give you an idea of where the Spanish Mackerel brain is check out Iki Jime  website for an X-ray view of a Mackerels head. Cutting th throat and bleeding Spanish Mackerel greatly improves the eating quality.

I hope this helps you land your first big Mackerel. It’s a fish that I think all Spearo’s remember landing for the first time and as always if you have any comments or wish to add something I’ve missed you can do so at the bottom of the page. It helps everyone that reads it. And a big thank you to everyone for the great pics!!

For some more advice and stories about taking down Spanish Mackerel, have a listen to Rob Allen’s ‘Veterans Vault’ section in our interview with him. We talk tactics, flasher magic and the one that got away.

For more information about spearfishing Spanish (King) Mackerel check out

How to Hunt Spanish Mackerel 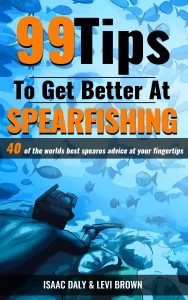