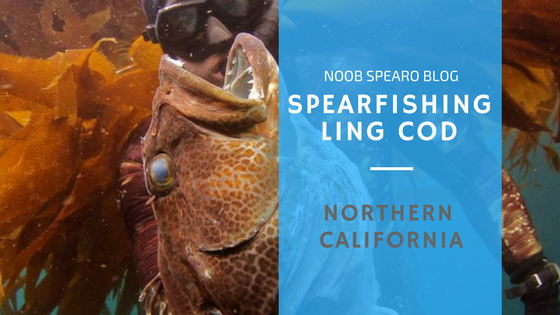 Ling cod (Ophiodon elongatus) are one of the primary targets in Northern California for line anglers and spear fishermen alike. They are one of the biggest fish in Northern California and have great eating qualities. They are described as being dragon like with large predatory teeth. They are easily accessible from the shore making them a fantastic fish to hunt for beginners and experienced spearos alike. Any hole or crevice along any rocky point, or reef could hold a Ling cod.

The state record for Ling cod is 37lbs taken in Mendocino by Dan Siviera in 2012. However the angling record is 56lbs taken by a lure in Del Norte in 1992.

Ling Cod can be found on top of reef structure but generally they are well hidden in rock crevices and caves. Ling Cod prefer smaller tighter caves where they can be snug and avoid predators like seals. This also affords them protection for their eggs. It is always worth looking around these schools for crevices and caves. Some spearo’s say you can see bite marks on the blue rock fish which gives you a good indication that that Ling Cod are in the vicinity.

How to spearfish for Ling Cod

As mentioned in behaviour the Ling Cod’s preferred habitat is in rock crevasses and caves and therefore that’s where you need to focus your efforts. This method of spearfishing is called “hole hunting” and is used by Californian Spear fisherman all along the coast. 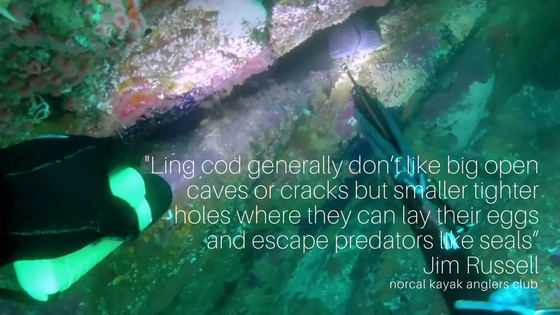 Hole hunting is literally a matter of poking your head and torch in the hole to see if there are any Ling Cod in the hole. Though Ling Cod can be found in crevasses that face in any direction it is the ones that face away from the prominent swell direction that are more productive. These are generally shore facing. According to Jim Russell a good hole will continue to produce fish year after year and in some instances he has even found fish that have moved in on the same day so it is always worth another look.

“When coming back up from checking out a hole, don’t forget to scan the top of the boulder or pinnacle Lings and Cabs will often perch right on top and hide there in plain sight waiting for a meal”

Once spotted Ling Cod can be a rather forgiving species and generally won’t become frantic and make a break for it straight away. It’s therefore important to line your shot up well and make a good clean headshot, particularly if you will be pulling the fish from a tight hole. It is important to remember that overpowering your gun can lead to bent spear shafts and lost spears. 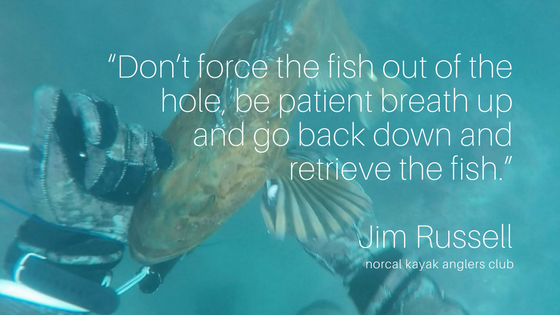 Once shot the Ling Cod like most other fish can be difficult to remove from the hole or crack. Jim Russell urges people to be patient. If the fish won’t budge from it’s hole its better to run your reel line out or swim up your float line, breath up and go back down. This will save you from tearing the fish off the spear or bending your spear shaft.

Ling Cod like many other fish can be inquisitive and as curiosity killed the cat, it too can kill the Ling. Ling Cod can sometimes be seen following a diver from a distance. Once a diver turns on them they will often stop and rely on their camouflage for protection making for an easy target. Other spearos will make noise by jingling their stringer or bang their gun on a rock to help entice a Ling cod out of hiding. Backtracking can also yield results when curious Ling are following a diver.

Ling can be found in very shallow water right through to deep water.

Sometimes the most difficult part of spearfishing is identifying and locating productive ground. On the East Coast renown Striped Sea Bass spear fisherman David Hochman runs a spearfishing charter targeting the schools of striped Sea Bass around Block Island (Read more) (Listen here). He can’t afford not to find the schools of fish for his clients and as such has accrued a GPS waypoint library of over 400 marks in his area. David also records what marks held fish and the time of year.

Jim Russell on the West Coast in Northern California uses a similar approach but he does so without the use of a boat. Before setting out Jim studies the coastline using topographic maps that have been compiled over several decades by the California Coastal Records Project (link here). Every square inch of the coast has been photographed and is great resource for finding new ground.

Then there’s the Navionics app available for download. This handy app shows all of the bottom contours and is a great way of finding pinnacles and drop offs. The app also allows users to mark their spots essentially turning your phone into a marine GPS. Albeit one very sensitive to water.

Thirdly Jim uses satellite images on google maps to find areas where he can easily access the ocean. He looks for tracks that access the water when planning trips along the coast.

When Jim is in the water and finds a productive hole he will surface and mark it with either a hand held GPS or has his phone in a dry bag and uses the Navionics app. On returning to a spot Jim uses a drop weight to mark the spot, then paddles away and clips off to some kelp before swimming back to the spot and diving on it. A drop weight can be a dive weight, float line and float. Using his catalogue of spots Jim can move from one spot to the next and cover more ground productively.

Northern California has some unique conditions. Northern California is known for it’s thick kelp stands that, during the summer months grows rapidly. The kelp can become thick making it difficult to dive through and can block out the sunlight making the bottom quite dark. The kelp later rots and the rotting matter becomes suspended in the water column turning the water a tinge of green and reducing the visibility to a mere couple of feet. On the up side summer has calmer ocean conditions. 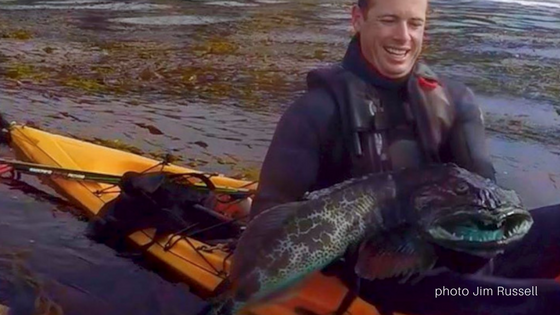 During September through to December the winter storms create larger swell. The increased swell dislodges the kelp and flushes the dirty water with cleaner offshore water. This increases the visibility which can increase to 40 feet making the diving better. In winter it is a matter of watching the weather and picking your dive days between the storms.

As with every part of the world the fish being hunted and the conditions they’re hunted in dictate the spearfishing gear that’s used. Northern California and Ling Cod have a couple of specifics that influence gear choice. The first is the close quarters that hole hunting requires. Therefore the guns are short in length generally 65cm -75cm. The often poor visibility also requires a short manoeuvrable gun.