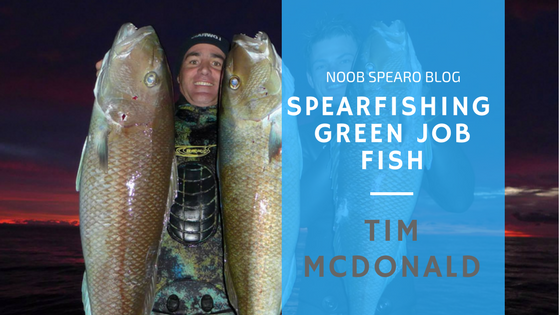 Here’s a quick run down on spearfishing Green Jobfish. These are a few of the Tips that Tim McDonald shared with us recently in episode 70 of the Noob Spearo Podcast. When speaking with Tim it’s clear how much time and effort he has put into deciphering these fish.

Tim targets Green Jobfish in Southeast Queensland, probably the southern most extent of the species range on the East Coast of Australia. He says they exhibit some different and peculiar traits to their Northern counterparts.

“I’ve never seen Jobfish eat burley here, which is weird because if you go to the Coral Sea and drop a bit of burley over the side you’ve got fifteen Jobfish eating it”

Due to this difference in behaviour Tim says the hunting is very different. In the North he says chumming is very effective for attracting Jobfish to the area. In South East QLD however Tim says it’s a different story.

Further South into New South Wales and Tim says it gets even more challenging to hunt Green Jobfish.

“That’s the biggest challenge with Jobfish, Wanting a fish so bad, but making sure your body language doesn’t portray that you do. That’s most guys’ biggest challenge. They want to shoot it so bad and they can’t hide that. They start waving their gun around, they don’t get their gun in the right position early enough, they don’t keep their eyes down for those brief moments.”

We asked Tim what techniques he uses to attract the Jobfish’s curiosity once he’s on the bottom.

“Scratching a bit of coral, throwing up a bit of sand all those things work. But again I probably put too much thought into it. I wear gloves that I think make the right noise”

Through trial and error, and a little desperation Tim even swapped out gloves of different material to see what worked better and he believes there is a marked difference. It’s almost like a fisho swapping out a lure for a different action when it’s not working. It’s probably not something most of us would think of doing but that’s the level of thought Tim puts into his hunting.

“But also sometimes just hugging your body to the bottom, which is not easy to do when you’re busting to breath”

Tim believes that the Green Jobfish is very susceptible to noise both positively and negatively. He says the right noise will attract them and the wrong noise like bumping your gun on the bottom will spook them.

When we asked if he ever makes noises with his throat and mouth he replied.

“If you ever want to shoot a Green Jobfish, that’s the best way to spook them away”

I think the big takeaway here is Tim’s willingness to observe and make small changes until he finds something that works. He hasn’t become as effective as he is by doing the same thing every time he goes out diving.

If you’d like to hear more of our conversation with Tim go here. We chat about his approach to hunting and how he applies it to three big species, Barramundi, Pearl Perch and Green Jobfish.