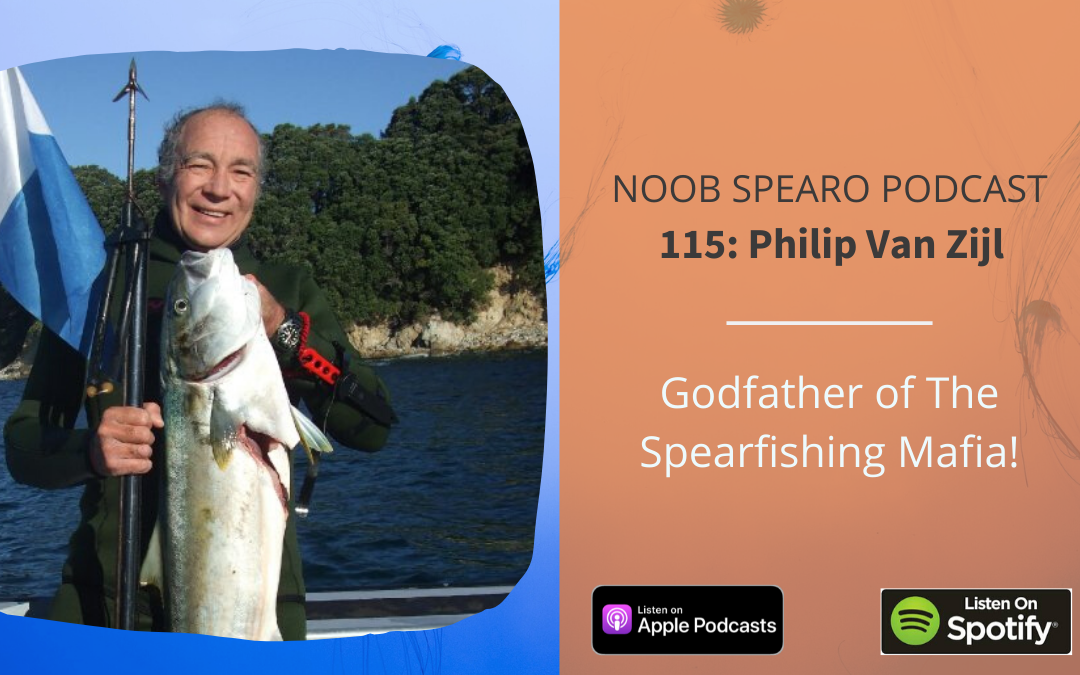 This episode of the Noob Spearo Podcast – Interview with Philip Van Zijl covers this legend’s spearfishing journey from the jump to competition diving starting in Cape Town, South Africa to New Zealand and plenty of places in between. He’s a champion of the sport, an absolute legend. He’s a major contributor to the spearfishing community, and a big proponent of paying it forward. Something he’s coined “The Spearfishing Mafia”. Our community, sport, and the hobby are niche. It’s even more niche than SCUBA diving. Take advantage of it, and build your network.

Big thanks to Philip for taking the time to “pay it forward” on the Noob Spearo Podcast!

Philip Van Zijl began diving in Cape Town in 1968 at the young age of 16, without wetsuits and just basic gear taking the train to get to where he needed to be. Yellow tail, crayfish, and other good species were some of his earliest accomplishments, always a good feed! A master of limiting out on crayfish during his years in school. He even paid for a year of his time at university from the fruits of his diving! A strong proponent of speargun awareness, make sure you listen to find out why…

Philip personally procured one of his 120cm spearguns from the legendary Rob Allen, what a story! Think you’re bad about keeping old gear? Philip still has his first catch bag he bought in the 60’s.

His last dive in Tauranga, NZ with a mate who brought him to a secret honey hole. 15-20 meters visibility, perfect conditions. Kingfish, historically uncommon for the area but are making a comeback. He was diving with some friends, stomach started to sour, and then returned to the boat. After viewing a bait ball of Kahawai, he grabbed his gear and jumped back into the water. Viewing a school of Kingfish, he pulled the trigger and bagged a PB weighing in at approximately 27 kilos! To hear his second most memorable catch on a “popgun”, tune in to 35:43!

Snapper, hands down. A challenging quarry, requiring a combination of burly and stealth. 3-4k tops, but no monsters like on the GBR. Additionally, slow movements, be calm, don’t look directly *at* them, and let them get within target range. Maintain gun awareness so that when the shot presents itself, it can easily be taken. Learned from losing a 6k Trevally years ago. Learn about the duality of the gun safety discussion here!

42:50 Scariest moments in the ocean

While shooting a Blue Moki, the bugger got off the spear and high-tailed it into a crevice. Meanwhile, a surge came and pushed Philip into a crevice in which he was stuck. Every spearo’s nightmare. Trying to remain calm, he additionally considered that a surge which can push you in, can also pull you out. Going for broke, he expelled the air in his lungs to reduce his physical profile and was able to get pulled out on the next surge out to sea. Probably the scariest moment of his life. Lesson learned – be very careful when working a crevice while fishing for crays or otherwise.

Additionally, catch-bags are a must, saves you from going back to your plat “float boat”. Avoid harassment from sea lions, seals, or the tax man by simply using a catch-bag. Actually, saved a fishing competition by using one as the sea lions were going from float to float getting chubby on the hard work of humans. Carry two knives – one on thigh and one on arm. To avoid losing knives, use some paracord or dyneema, tie it off to a pencil or other instrument, then tie that to the end of the knife. This way, when you drop the knife (not if, but when) it will stay secured.